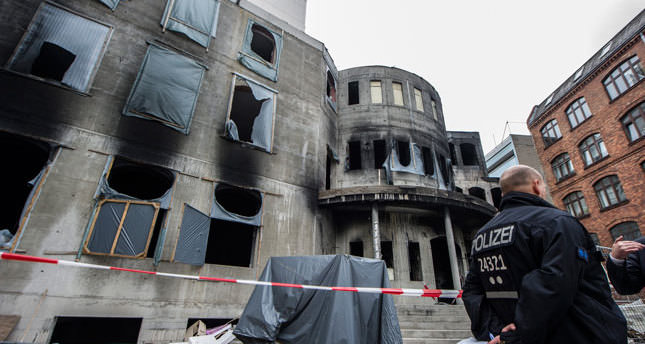 Suspected arson attacks on mosques attended by Turks in Germany raises concerns about a rise in Islamophobia and racism. In Germany alone 81 attacks targeting mosques were carried out since 2012

A Turkish delegation comprised of officials from Turkish Parliament's Human Rights Committee and head of Turks Abroad and Related Communities directorate of the Turkish Prime Ministry started a two-day visit to Germany yesterday to inquire about the extent of attacks and suspicion of arson.

Their first visit was to Berlin's Mevlana Mosque. A fire broke out in a part of the mosque that was being redecorated on August 11. The cause of the blaze is not yet known but German officials said they found traces of a flammable liquid at the scene, pointing to arson. Located in Kreuzberg, a district of Berlin dubbed as "Little Istanbul" due to its large population of Turks - approximately 40,000 people - the mosque was partially open for prayers as reconstruction was underway on the 40-yearold structure.

One day before the attack in Berlin, the Süleymaniye Mosque in the German town of Bielefeld was set on fire by suspects who burned Qurans in the mosque. In February, the Central Mosque in Cologne, one of the largest mosques in Germany, was subject to attacks. Suspects crashed a car into the door of the mosque and attempted to set the mosque on fire.

In Germany alone, apart from three recent attacks, 78 attacks targeting mosques have been carried out since 2012 and 219 attacks were carried out between 2001 and 2012. Although arson attacks remain rare, hate crimes targeting Muslims in Europe have spread. In Norway, the Pakistani imam of a mosque, where a pig's head was earlier left on its front door, was injured in an axe attack in June. Other mosques in the country have received arson threats. Racist and Islamophobic attacks have also targeted mosques in Denmark and the U.K., although there were no casualties. Along with mosques, Muslims were targeted in hate crimes. In London, 500 Muslims have been the victims of hate crimes in 2013.

In the Netherlands, four suspects attempted to attack a mosque run by Turks in June, but the Muslim community prevented the attack. Minor attacks targeted mosques in several Dutch cities in 2013. Four mosques were subject to attacks ranging from assailants hurling eggs and Molotov cocktails to incidences of pigs' heads being left at mosques. In Austria, swastikas were drawn on the walls of a mosque earlier this month.

The Turkish community views the attacks as isolated incidents by fringe groups though they criticize the German media and politicians' approach to the attacks in a way entirely dismissing the threat.

In a visit to the Mevlana Mosque on Aug. 23, German Vice Chancellor Sigmar Gabriel, said he viewed the attack on the mosque as important as any attack on any community center. He said they do not want "conflicts" in other countries to be brought to Germany and that Germany wants the peaceful coexistence of different cultures.
Last Update: Aug 26, 2014 4:17 pm
RELATED TOPICS