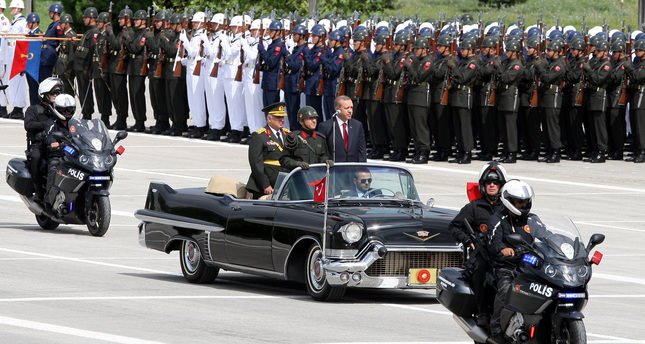 by AA Aug 29, 2014 12:00 am
Turkish President Recep Tayyip Erdogan received the country's top brass along with a host of local and foreign dignitaries at the Cankaya Presidential Palace on Saturday morning, marking the 92nd anniversary of the Victory Day.

Parliament Speaker Cemil Cicek, Prime Minister Ahmet Davutoglu, head of the Constitutonal Court Hasim Kilic, General Staff of the Turkish Armed Forces Necdet Ozel and head of the Supreme Court, Ali Alkan were among the names who visited Erdogan following a ceremony at Anitkabir, the mausoleum of Ataturk, Turkey's founder.

Foreign ambassadors and chiefs of mission were also present at the palace both to celebrate the Victory Day, and to congratulate Erdogan on becoming Turkey's 12th President.

Erdogan was sworn in Thursday.

Vatan Boulevard in Istanbul was the main venue for celebration parades, which also took place in capital Ankara, Izmir and other cities across Turkey.

The victory on August 30, 1922, over the Greek military was the last major engagement between the two armies.

The war began with the Greek invasion of Izmir in May 1919 after the end of World War I with tacit support from the Allies.