A new camp for Yazidis in Turkey 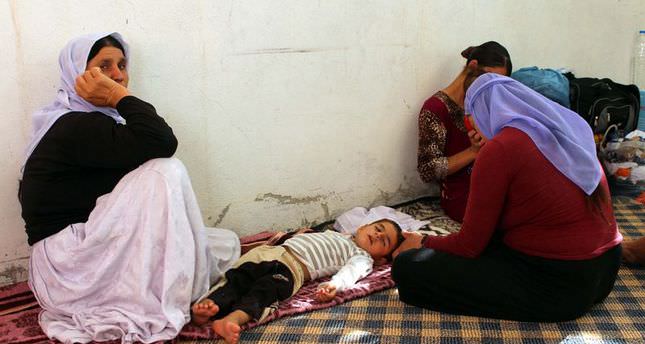 by Daily Sabah Aug 30, 2014 12:00 am
Municipalities in the southeastern Turkish province of Diyarbakır joined forces to set up a tent camp for Iraqi Yazidis who took shelter in the region. The tent camp will house 3,000 people and will be located in the city of Diyarbakır where the number of Yazidis arriving from Iraq surpassed 1,000. Iraqi Yazidis who fled the campaign of terror perpetrated by the Islamic State of Iraq and al-Sham (ISIS) in Iraq, resided in unused buildings, an indoor sports hall and other places allocated for accommodation by the Diyarbakır municipality.

In Hakkari, another southeastern province, locals provide daily bread for the displaced families. Families with a tandoor, a traditional clay oven found in most houses in the region, are supplied flour by local nongovernmental organizations that they used to make the bread. Women bake the bread while men package the cheese they bury for preservation before consumption in the winter. Both cheese and bread were later handed to NGO officials to be delivered to Yazidis in the neighboring province of Şırnak where they took shelter.

Over 2,000 Iraqi Yazidis fleeing violent attacks by ISIS in Iraq took refuge in southeastern Turkey in July and August. Turkish authorities and locals have provided humanitarian aid to the refugees who are housed in unused buildings and refugee tent camps in the region.
Last Update: Aug 31, 2014 3:52 pm
RELATED TOPICS