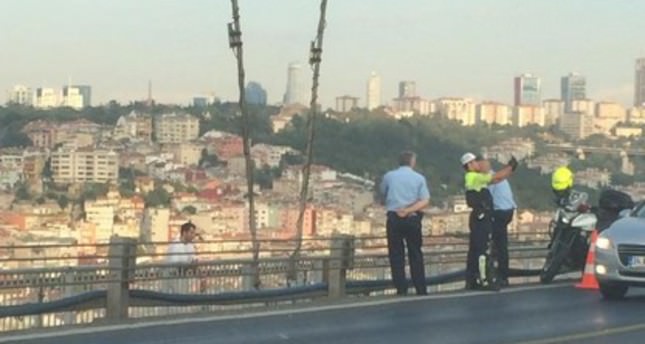 by Daily Sabah Sep 01, 2014 12:00 am
A policeman reportedly taking a selfie against the backdrop of a man clinging to the rails of a bridge in Istanbul has raised controversy.

Sadrettin Şaşkın, 35, who reportedly suffered from familial and financial problems, climbed the rails of Istanbul's Bosporus Bridge at around 6:30 a.m. yesterday, determined to jump off. Policemen rushed to the scene, trying to convince the suicidal man not to jump.

A photo of negotiations, meanwhile, has hit social media websites. The photo shows a policeman raising his cellphone in an apparent attempt to take a selfie with the man. The authenticity of the photo has not been verified yet but the photo drew the ire of social media users who condemned the policeman's attempt to take a selfie instead of helping the rescue efforts.

Local media reported that the Turkish National Police have launched an investigation into the "selfie officer."

As for Şaşkın, the suicidal man jumped off despite three hours of efforts by the police.

Divers recovered the man a few kilometers away from the scene. Left unconscious from the fall, Şaşkın lost his life despite resuscitation efforts. Officials said Şaşkın had attempted suicide twice before.

The suicide on the bridge, one of the busiest transit routes connecting Istanbul's Asian and European sides, led to a frustrating traffic snarl that continued for hours. The Bosporus Bridge is often the scene of suicide attempts.

On Aug. 21 at around the same time in the morning, another man jumped to his death from the bridge.