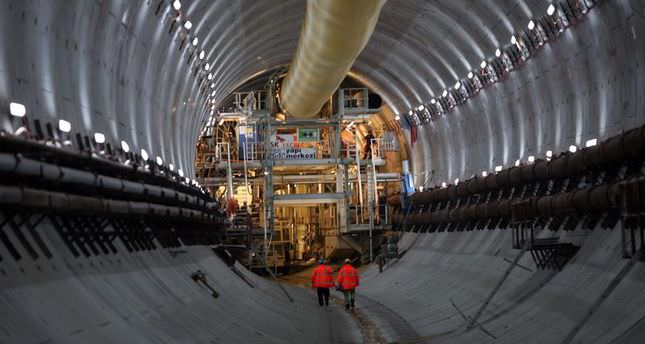 by AA
Nov 01, 2014 12:00 am
A huge underground road tunnel being built underneath the sea in Istanbul may be completed sooner than expected.

Istanbulites are hoping the enormous 14.6- kilometer "Eurasia Tunnel Project" linking Kazlıçeşme on Istanbul's European side and Göztepe in Asia will reduce the city's notorious traffic levels.

The project is set to open in 2016, the country's transport minister Lütfi Elvan said earlier this week.

Speaking at the tunnel's construction site, Elvan said: "One-third of the tunnel is completed which means that 1.2- kilometer of the 5.4-kilometer section of the tunnel under the sea is finished. I think the tunnel will be completed sooner than we had expected."

Although the project aims to reduce congestion and relieve traffic density on the huge suspension bridges which cross the Bosporus strait, it has also sparked a debate on whether it will be successful.

Living in Göztepe and working in Zeytinburnu where Kazlıçeşme is located, 39-year-old security guard S. Günaydın is one of the millions of Istanbul residents for whom the Eurasia tunnel is intended.

"I have a car, but to drive from Göztepe to Zeytinburnu in the rush hour takes about two hours if I use the Bosporus Bridge or else it takes four hours via Fatih Sultan Mehmet Bridge. "It is a nightmare," he says.

Stating that the tunnel project is cut out for him, Günaydın says: "I will be able to use my car instead of using mass transport and pass through the tunnel in 15 minutes, but the passage fare will be $4 for each car. It can be expensive when compared to mass transport."

"Istanbul has been struggling for more than two decades to solve this problem by redirecting traffic away from busy areas," says Mustafa Ilıcalı, a transportation consultant for the Istanbul Metropolitan Municipality.

In December 2006, Turkey's Transport and Communication Ministry tendered the project under the name of the "Istanbul Bosporus Tube Crossing Project."

The project was contracted in 2009 with the cooperation of a Turkish-Korean joint venture, which was later named as the Eurasian Tunnel Operation Construction and Investment (ATAS) in 2011.

The Eurasia tunnel will be Turkey's second underwater project in Istanbul after the "Marmaray," a railway tunnel underneath the Bosporus Strait, which has already transported around 21 million passengers in the first six months following its inauguration in October 2013.

Moreover, a third bridge over the Bosporus is currently in construction and is expected to be ready by the end of 2015. The construction company which is building it claims the structure will be the widest (59 meters), longest (1,048) and highest (320) bridge in the world.

Despite noticeable improvements, these projects have struggled to diminish the traffic flow in the city.

According to Ilıcalı, it is impossible for any project to end Istanbul's traffic problem forever.

"The wasted time in traffic jams in Istanbul costs over $5 billion every year. Every day, around 600 new cars join city traffic and 80 percent of these vehicles are private vehicles," he says.

"The average number of persons traveling in these vehicles does not exceed one or two persons. Around 2 million vehicles take to the roads each day in this city."

Günaydın, indicating that the tunnel will only be able to be used by light vehicles such as cars and minibuses, says: "There are more than 3 million registered cars in Istanbul. Both the population and number of vehicle owners are increasing in the city day by day.

"The tunnel will be a good choice for citizens like me, but it will just be a local solution."