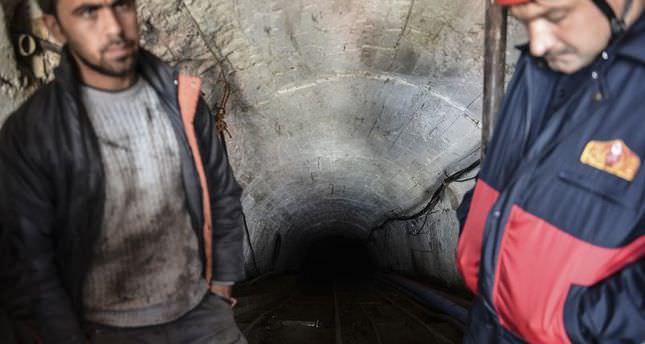 by AA Nov 01, 2014 12:00 am
Mesut Öner was among the 16 people who managed to flee to the surface when flooding waters inundated an Ermenek mine. He was also the first miner to notice the water filling the galleries before warning his co-workers.

Öner, 22, told his story of survival, recollecting the horrific minutes when the miners suddenly found themselves surrounded by water bursting into the gallery.

The young man started working at the mine one year ago and was having lunch with his fellow miners when he saw "wet coal dropping."

"There were four others. I told them the mine may collapse and called upon them to flee. Ahmet [another survivor] went to check and immediately returned. We told others to flee. Hasan Tuncer [one of the trapped miners] told us that he would check the miners in another gallery and left," he said.

"We hurried to the exit with Ahmet and told others we came across to follow us," he said. "I was at a point between life and death. I ran for more than 400 meters and climbed 1,100 steps to the surface. I was wading through the water, and there was also smoke. I couldn't breathe, and I was tired of running. I thought I was going to die. Then, I saw the light," he said, referring to the light at the exit. "I would have given up if I didn't see it," he adds.

Öner reminisces that he heard carts in the mine clunking as they were swept away by floodwaters. "I never looked back. I now feel guilty that I could not notify all the other miners," he said.

"When I reached the exit, I saw people at the entrance of the mine. I was vomiting, and they rushed to me asking about what happened down there. I told them what happened, and they carried me to an ambulance," Öner said.

The miner says they all would be alive if they had lunch outside. "I told the foreman [one of the trapped miners] that we should have our lunch outside two weeks ago. He told me that the owners of the nine mines in Ermenek said workers should have their lunch inside the mine, and they can't change it," he said.