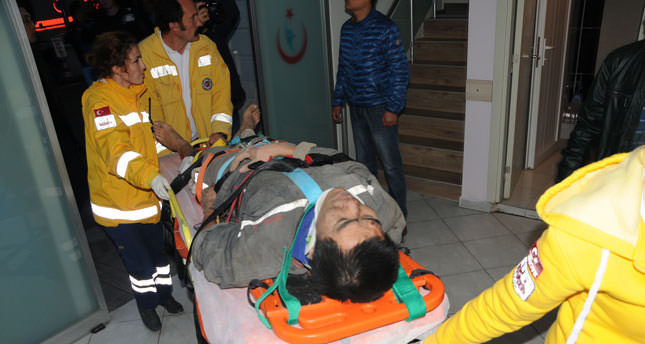 by daily sabah
Nov 03, 2014 12:00 am
Mining remains one of the most dangerous professions in Turkey despite measures to improve work safety. As evidenced with a new "accident," or rather a disaster, the blame is rather upon private companies operating the mines than regulations.

The deaths of two Chinese workers in a coal mine on Saturday in the northern Turkish province of Bartın revealed the shortcomings when it comes to work safety.

Maoshun Yang, 38, and Shouje Sun, 37, were working to open of a new gallery in the mine located in Bartın's Amasra district when rocks rained down on them during a collapse in the early hours of Saturday. Both men were killed while Sun's elder brother Shouping Sun, 40, survived with injuries.

The mine was the scene of another "accident" on Sept. 19, again, during the excavation of a new gallery. A Chinese worker was killed and another was injured in the incident.

Six days after the first incident, authorities carried out one a regular inspection of mine safety and found "vital" deficiencies in two mines operated by the same company in Amasra. Following the inspection, activity in two mines was suspended, according to the Turkish media, although it is unclear for how long it was suspended. Apparently, the mining company addressed the shortcomings and resumed operations as is the case with other mines whose work safety is found to be deficient. Local authorities said that the suspension order was not for the mine where Saturday's incident occurred.

As for the shortcomings in work safety, Anadolu Agency reported that the inspectors found the evacuation station and crew was "not available or inadequate" while the ventilation system of the mine and electric equipment used at the site did not have a certificate of compliance with the standards for the equipment.

The Turkish company operating the mine tried to dodge the blame. Company officials said the mine was operated by Chinese subcontractors.

The Chinese workers were among over 150 who left their country for a better-paying job in Turkey. The majority of them hail from Heilongjiang province, China, known for its coal mines.

Another mine accident also occurred on Saturday, in the northern province of Zonguldak, which is home to rich coal resources. A cable holding a cart used to transport coal from the mine was torn apart by an unknown reason and hit one of the miners. The miner died at the scene.