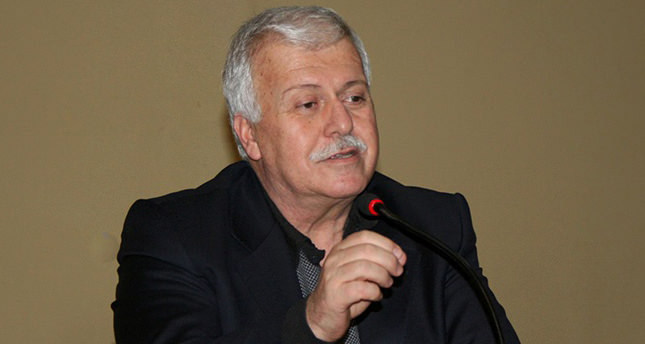 by daily sabah
Nov 03, 2014 12:00 am
Former Zaman Newspaper columnist and once a significant figure in the Gülen Movement, Hüseyin Gülerce, gave a statement as part of the investigation into the group saying he deemed two operations conducted on high-level ruling party officials in December 2014 as an attempt to overthrow the government.

Gülerce, who parted ways from the daily after dissenting with its publication policy, which he saw as overcritical of the government, said he began pulling away from the movement when Istanbul's specially authorized prosecutors, Sadrettin Sarıkaya and Bilal Bayraktar, who are thought to be followers of the Gülen Movement in the judiciary, issued a summons for National Intelligence Organization (MİT) Chief Hakan Fidan for collaborating with the PKK. Gülerce said he was shocked at the crisis. The incident followed the daily's stance during the Gezi Park protests, which began as a sit-in demonstration and morphed into vandalism by some circles trying to exploit the turmoil the country was going through. Gülerce said Zaman criticized the government for its lack of ability to stabilize the protests and using excessive force against protestors during the events. As the Dec. 17, 2013 operation became public, which was later followed by another operation launched on Dec. 25, Gülerce said that he became aware that the movement was attempting to topple the government.

On Dec. 17, 2013, the Financial Crimes and Battle Against Criminal Incomes department of the Istanbul Security Directory detained 47 people, including sons of three former ministers as well as prominent businessmen as part of an investigation led by a prosecutor allegedly affiliated with the Gülen Movement. Furthermore, permission to conduct the investigation into government officials was issued by an alleged Gülenist prosecutor, Zekeriya Öz, with an enactment of the HSYK. Öz was later accused of being partial while carrying out his duty and the HSYK launched an investigation into Öz for losing his objectivity. Another operation followed on Dec. 25 implicating government officials this time.

Gülerce, who gradually became uneasy over the publications of the daily, which he claimed was challenging the government, said he decided to split from the movement as a result of its controversial stance against government. Gülerce submitted his resignation to the daily on Aug. 26, 20 days after the daily stopped publishing his articles.

"I maintained my goodwill toward the movement until the crisis of the MİT broke out on Feb. 7, 2012. On Feb. 8, Zaman ran a headline that read 'The prosecutors have done nothing wrong so far.' The headline was like a challenge to governmental officials. I thought our religious leader [Fethullah Gülen] would be bothered by such a headline given he never wanted to stand up against the government before. I was, on the other hand, startled by the story," Gülerce said.

Gülerce said a meeting was held following the incident in which he argued that siding with the prosecutors in question would escalate tensions between the government and the movement.

"I claimed [during the meeting] that it was wrong to say every prosecutor does the right thing," Gülerce further said in his statement.

Noting that the incident came as the first shock from the movement he was closely linked to, he said he was later astonished by the articles published by Zaman daily during the Gezi Park protests.

"The articles were full of insults about then prime minister, Recep Tayyip Erdoğan. Fethullah Gülen always told us 'our language is our honor.' So, our tone should not have been offensive. Following these developments, I decided to break my connection with the movement as I became sure it was attempting to topple the government with the Dec. 17 and Dec. 25 operations," Gülerce's statement further read.

The Gülen Movement is seen as a national threat by the government since the movement is accused of wiretapping thousands of people including Turkish government officials, encrypting phones and allegedly infiltrating state institutions with the aim to overthrow the government. The movement is led by retired imam Fethullah Gülen who lives in self-imposed exile in the U.S.
Last Update: Nov 04, 2014 3:31 pm