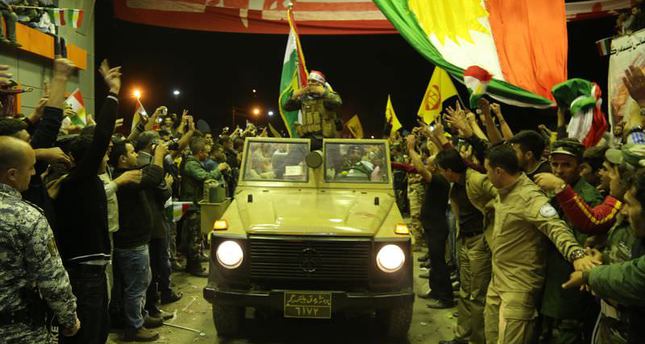 by AA
Nov 04, 2014 12:00 am
The Turkish government has dismissed claims that a second group of Kurdish peshmerga forces will be sent by the Iraqi Kurdish government via Turkey into the Syrian border town of Kobani, to help assist Kurdish groups fighting ISIS militants.

"It is certainly not true that a second convoy of armed forces will go to Kobani (via Turkey)," Deputy Prime Minister Bülent Arınç told a late night press briefing following Monday's Council of Ministers' meeting in Ankara.

"We have recieved neither a demand nor any notice, and there is also no preparation for such a move," Arinc added.

Turkey had recently given the go-ahead for the passage of a group of around 160 Iraqi Kurdish peshmerga forces through its territories to reach the battle-torn town lying on Syria-Turkey borderline, whose mission was to repel the ISIS threat to the Kurdish town.

The Kobani-bound peshmerga troops landed in a private plane at Turkey's GAP Airport in the southeastern province of Şanlıurfa, having flown from the Iraqi Kurdish capital, Irbil, early on Wednesday. A separate truck convoy carrying their heavy weaponry entered via the Habur border crossing in the southeastern Şırnak province.

After entering Turkish soil, the convoy with the troops and their weaponry on board crossed the Yumurtalık border gate late Friday into Kobani.

The battle for control of the strategic Syrian town between ISIS militants and armed Kurdish groups has been raging since mid-September when ISIS entered the town. An estimated 1.5 million Syrian refugees, including some 190,000 from Kobani, are being sheltered in camps across Turkey after fleeing the fighting.

Turkey has also strongly supported a proposal before the international community and the UN to establish a no-fly zone and a safe haven for refugees inside Syria near the Turkish border.

On the other hand, a KRG official said on Monday that additional Kurdish peshmerga forces are prepared to reinforce forces defending the besieged Syrian town of Kobani.


Falah Mustafa Bakir told The Anadolu Agency that the KRG is prepared to send additional troops "if needed," following public remarks at the Johns Hopkins School of Advanced International Studies.

Bakir thanked Turkey for its role in facilitating the movement of an initial convoy of peshmerga fighters into Kobani, saying, "This has proven that we are all together in fighting ISIS and we all have a shared interest. ISIS is a threat to all of us, and we all have to work together in order to defeat them," using an alternative name for ISIS.

The convoy of fighters and heavy weapons crossed the Syrian border from Turkey on Friday to reinforce Kurdish People's Protection Units, who have been fighting an ISIS offensive there since mid September.