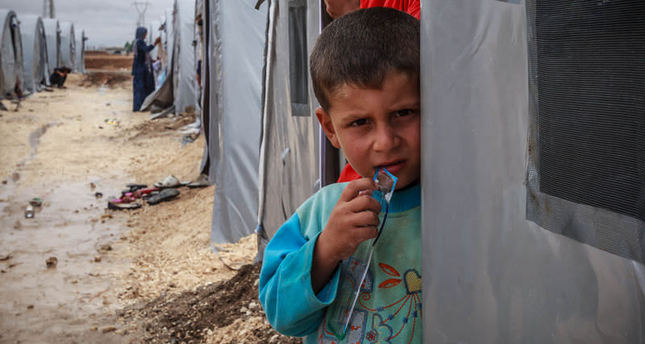 by AA
Nov 04, 2014 12:00 am
The financial cost of Syrian refugees for Turkey has reached $4.5 billion, including $2.3 billion from the central government budget, the country's finance minister said on Tuesday, in response to a parliamentary question from deputies.

An estimated 1.6 million Syrian refugees are currently being sheltered in camps across Turkey, including 200,000 who have recently fled fighting in the border town of Kobani.

According to an Ankara-based Hacettepe University report, as of October 2014, Turkey is hosting over 1.5 million Syrian people-with 1.4 million of these living outside of official camps.

Based on data from Turkey's Interior Ministry, 72 of 81 Turkish provinces are currently home to Syrians who have fled their country.

Finance Minister Mehmet Şimşek said on Tuesday "We are not only spending from the budget. There are efforts by local authorities. The most recent figure is $4.5 billion."

Last week, Turkish deputy foreign minister Naci Koru called on Western countries to do more to help refugees from Syria and share the burden with those bordering the conflict.

Koru said a heavy burden was being borne by Syria's neighbors, and nations like Lebanon and Jordan, which were already overstretched, were concerned about security and stability.

"Turkey is hosting more than 1.5 million Syrians and so far has spent more than $4 billion. Unfortunately, we have only received $200 million to $250 million from abroad." he said.

According to the U.N. High Commissioner for Refugees, more than half of Syria's population has been forced to flee their homes, seeking refuge in Turkey, Lebanon, Jordan and Iraq.

Nearly 6.5 million civilians have been displaced within Syria and nearly 11 million Syrians are in need of aid within the country.