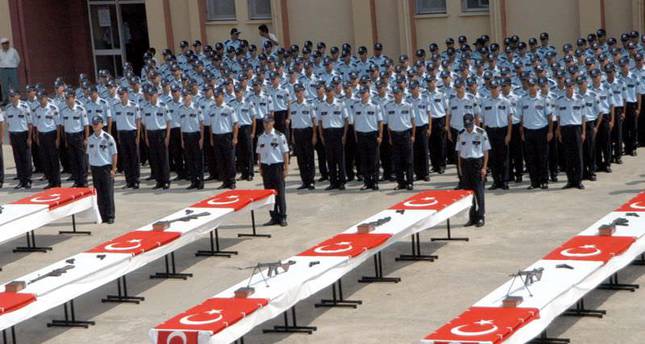 The National Police's rank-and-file system, which has suffered at the hands of the Gülen Movement whose members have infiltrated every level of law enforcement, will be revised through planned regulations by the Ministry of the Interior.

Gülenists, who are loyal to the Pennsylvania-based cleric Fethullah Gülen, have infiltrated the force by cheating on exams for new recruits and exams for promotion to higher ranks, leading to a large number of unqualified officers being promoted.

The regulations, which are part of a package of legislation on internal security, will increase the number of inspectors five fold, from 2,174 to 10,021, while the number of chief inspectors will be increased to 7,516 from 1,055. Higher ranks such as police chiefs and fourth and third degree police chiefs will see their numbers lowered. New regulations will also introduce early retirement for police officers. The waiting period for ranking officers for retirement will be lowered by one year while the waiting period for promotion to a higher rank for police chiefs will be decreased from four years to three years.

Seeking not to overstaff law enforcement, the ministry is also considering retiring promoted police chiefs "due to age limit" if they are not given a new duty, and retire those who have not been promoted for a long time.

Gülenists wield significant influence in the police and judiciary due to years of infiltration by the movement's followers. They are accused of facilitating the promotion of police officers loyal to them by helping them cheat on promotion exams. A voice recording leaked to Turkish media in April revealed a Gülenist scheme to help their loyalists pass a 2011 exam for the police vocational school (POMEM).

In the recording, allegedly recorded at the Police Directorate headquarters in Ankara, a man instructed other supposed fellow Gülenists to make their way into law enforcement. The man, who claimed to be head of police training services, told Gülenist officers overseeing the exam how to help police hopefuls cheat.

The government had previously vowed to pursue efforts to weed out Gülenists from every state agency they infiltrated.

The movement is accused of imprisoning its critics by using prosecutors, judges and police officers loyal to them through trials based on forged and fabricated evidence.