Thousands protest in Turkey against Israeli offensive on Al-Aqsa Mosque 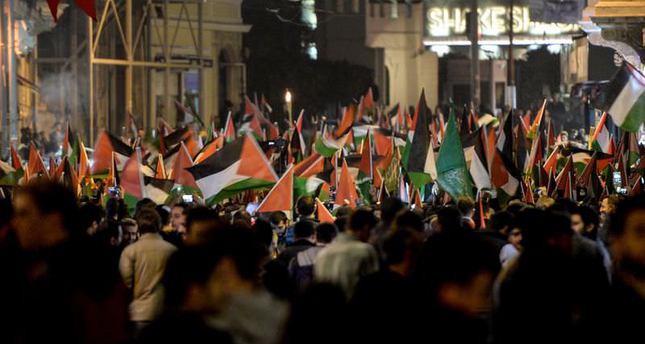 by Daily Sabah with Agencies
Nov 05, 2014 12:00 am
Thousands of people gathered in several Turksih provinces on Wednesday to protest the Israeli offensive in Al-Aqsa Mosque, and called for continued "resistance" against Israel.

The demonstrations were held after Israeli armed forces entered the al-Aqsa Mosque with shoes, trampled down the mihrab (a semicircular niche in the wall of a mosque) and attacked Muslim worshippers in the mosque with plastic bullets, tear gas and grenades, leaving 27 Palestinians wounded.

In the capital Ankara, demonstrators waved Turkish and Palestinian flags outside the Israeli embassy, chanted slogans like "Masjid-i Aqsa is not alone, Masjid-i Aqsa is our pride," "Muslims, don't sleep, stand behind your brothers." Activists also gathered in the Istanbul's famous Istiklal Street in Taksim, there were also demonstrations in other provinces, including Bolu and Denizli.

In September 2000, a visit to the Al-Aqsa by controversial Israeli politician Ariel Sharon sparked what later became known as the "Second Intifada," a popular uprising against the Israeli occupation in which thousands of Palestinians were killed.