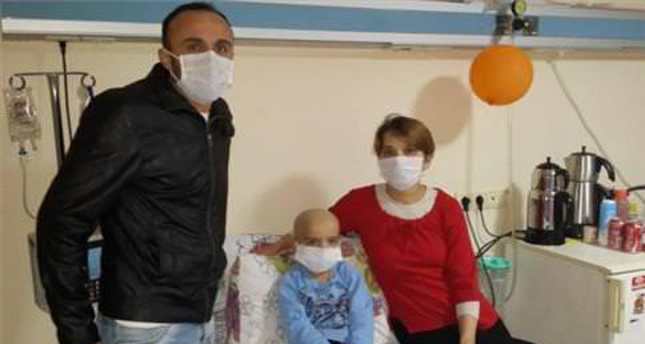 by Zeynel Yaman
Nov 05, 2014 12:00 am
The story of a 39-year-old grandfather made headlines as Turkey's Organ Donation Week started on Monday.

Turan Kuğumcu, living in Istanbul, donated his liver to his granddaughter who suffered from liver failure.

The young man's 18-year-old-daughter was married last year and she gave birth to a baby they named Ecrin. Doctors diagnosed the infant with cholestasis, a disease affecting the liver, in May when she was five-months-old.

The infant was hospitalized at a private hospital in Istanbul and doctors told the family she was in need of a liver transplant. Kuğumcu had his liver checked for compatibility and when he found out it was compatible, he decided to donate it to his granddaughter. A section of his liver was operated on and transplanted to the baby girl on July 25.

The grandfather, his daughter and granddaughter were at the hospital again on Organ Donation Week for a routine examination of the baby after the surgery.

"My daughter got married at an early age like I did and she gifted me with my first grandchild at this age. I was very worried when I heard about her illness," Kuğumcu said. "We visited different doctors, but they could not diagnose her illness. Finally, doctors here told us that my granddaughter needed a new liver. I didn't think twice when I learned that my liver was compatible and had it transplanted to her. I am very happy and hope she will grow up healthily," he added.

Professor Münci Kolayoğlu, who performed the transplant, said the young girl was recovering very well four months after the surgery. "She is a perfectly healthy baby now and in a few months, she will be fully recovered," Kolayoğlu said.

According to data by the Health Ministry, about 25,000 people in Turkey are in need of organ transplants. Kidney transplants are the most sought after with 21,768 people on the waiting list for compatible transplants, and is followed by liver, heart, pancreas and lung transplants. A total of 4,293 people received organ transplants last year.