Life sentence sought for eight executives of Soma mine 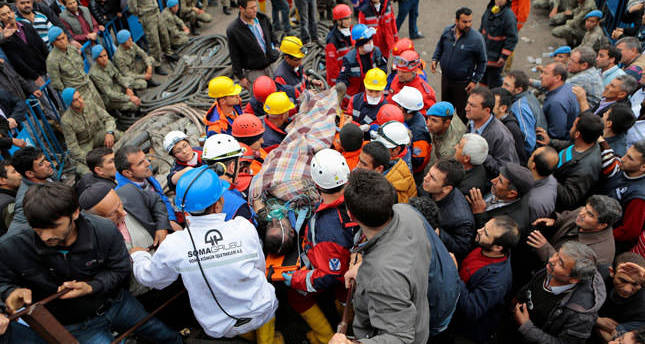 by daily sabah
Nov 06, 2014 12:00 am
Turkish prosecutors are pursuing life sentences for eight high-ranking officials of a mining company who are charged with involuntarily causing the deaths of 301 miners in May.

Ahead of their trial in the coming months, prosecutors wrapped up their indictment against Can Gürkan, chief executive of the Soma Kömür İşletmeleri and the son of the owner of mine's umbrella corporation, and seven other executives. For each miner killed in the mine in the western Turkish town of Soma located in Manisa province, prosecutors are seeking life imprisonment, 301 in total, on charges of manslaughter.

Twenty-nine lower-ranking employees of the company also face prison terms of up to 15 years on charges of involuntary manslaughter. Days after the mine disaster in May, Gürkan and others were arrested and placed in pre-trial detention.

An investigation found that safety violations at the mine, such as an insufficient number of carbon monoxide detectors, lack of quality oxygen masks and wood ceilings instead of metal ones, contributed to the high death toll. Miners died of carbon monoxide poisoning after an explosion led to a massive fire in the mine.

Despite inspections and improvements in workplace conditions for miners, another mine accident also hit Turkey last week. Eighteen miners were trapped in a flooded mine in the central Turkish province of Karaman's Ermenek town. Search and rescue efforts are underway to rescue the miners with little hope of their survival.