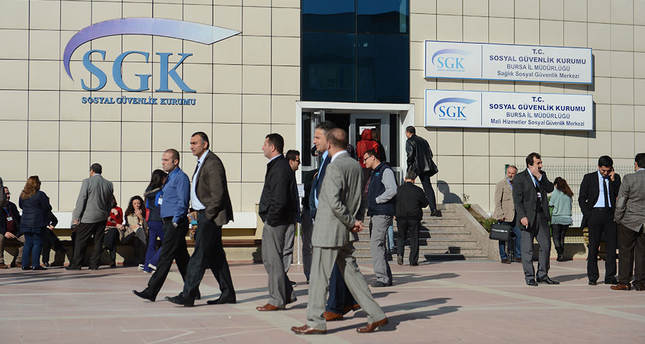 by daily sabah Nov 06, 2014 12:00 am
An operation conducted by Bursa Police Department on Wednesday into Turkey's Social Security Institution (SGK) has revealed that Gülenist infiltrators carried out illegal wiretapping activities within the body.

The investigation, which is currently ongoing in the institution, has thus far revealed that the wrongdoings of the Gülen movement, who are already notorious for engaging in illegally wiretapping people's phone conversations as well as encrypted phones, has extended to Turkey's social security Institution.

Teams from Bursa Police Department's Anti-Smuggling and Organized Crime Unit launched an operation into the Social Security Institution (SGK) early on Wednesday. The details of the operation surfaced a day after the operation was conducted, revealing that 'parallel state structures' – a term used for the Gülen Movement's infiltration into state institutions –had a special kind of telephone switchboard set up at SGK to be able to wiretap the officers of the institution. The total cost of the operation, which was set up six years ago, was 1 million TL.

After an officer from the institution submitted a petition to the prosecutor's office, the police signaled the green light to launch an operation over the complaint. The investigation revealed that a chief appointed by the 'parallel structure', known as the 'imam of the institution' among Gülenists, monitored all processes that went on in the institution and had encrypted phones bought for SGK. He allegedly obtained the passwords, which even provincial managers were not given access to. Through the use of these passwords, the Gülenist chief reportedly wrote off debts and retirements. Following the integration of the social security institutions, SSK and BAĞ-KUR, he allegedly gave away the furniture that was put in the depot of the institution—and went missing shortly after—to the preparatory schools of the Gülen movement.

The other Gülenists in the institution are also reported to have carried out defamatory activities against the ruling party. They allegedly conducted black propaganda against the AK Party ahead of the local elections that took place on March 30 2013, forcing the staffers to vote against the party. They further tried to sell the books written by Fethullah Gülen—the leader of the movement—in the institution, putting pressure on the officers to buy the books.

The Gülenists who recorded the voice recordings, which allegedly covered phone conversations that took place within the body, saved them to be used for blackmailing purposes.

Upon such allegations police confiscated a few computers cases, as well as the hard discs of a few computers, to find out whether any file covering data of wiretapped conversations had been transferred to a certain address.

No suspects have been detained so far over the incident but the investigation into the institution will reportedly be extended further.

As the investigation expands, the police will reportedly ask for statements from those allegedly linked to the Gülen movement.

The Gülen Movement is seen as a national threat by the government since it has been accused of wiretapping thousands of people, including Turkish government officials, encrypting phones and allegedly infiltrating state institutions, with the aim of overthrowing the government.
Fethullah Gülen, who resides in the U.S. in self-imposed exile, leads the Gülen Movement, which has charter schools and organizations in hundreds of countries around the world. The movement is currently accused of attempting to infiltrate Turkish state institutions, including the police and judiciary, as well as unlawfully wiretapping thousands of journalists, politicians, top secret state meetings and encrypted phones belonging to government officials.

Prime Minister Ahmet Davutoğlu and President Erdoğan have made it clear that infiltrators will be held accountable for their betrayal and attempts to take over the state through a coup.