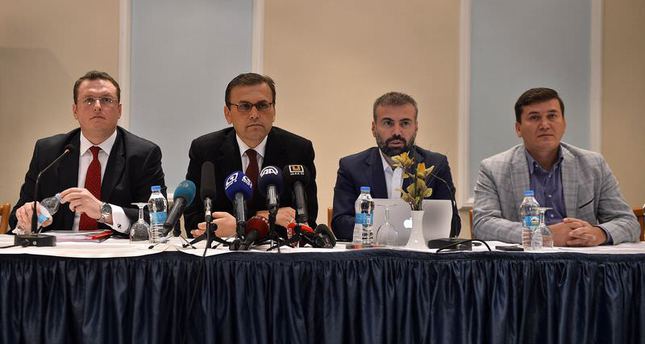 by AA
Nov 06, 2014 12:00 am
A number of Turkish lawyers have criticized the International Criminal Court for its decision not to investigate the 2010 'Mavi Marmara' incident.

The ICC announced on Thursday that the court will not investigate the maritime clash between pro-Palestinian demonstrators and Israeli forces due to a lack of "sufficient gravity."

In May 2010, Israeli commandos killed eight Turkish nationals and an American of Turkish origin in a raid on the Mavi Marmara, a ship then in international waters, in the 'Gaza Freedom Flotilla', which was carrying humanitarian aid and construction materials to Palestinians in the Gaza Strip, which was under an Israeli blockade at the time.

"This verdict is unacceptable. We will continue our fair struggle until Israel gets its just deserts," said Ramazan Ariturk, a lawyer in the Mavi Marmara case, at a press conference in Istanbul on Thursday.

On Tuesday, ICC prosecutors at The Hague had told a Turkish organization that Israel is guilty of 'war crimes' for attacking a Turkish aid ship bound for Gaza in May 2010.

However, media reports on Wednesday suggested that although ICC prosecutors believe Israeli soldiers committed war crimes during the raid, the court decided that the number of deaths was not sufficient to bring the case under the court's jurisdiction.

"Following a thorough legal and factual analysis of the information available, I have concluded that there is a reasonable basis to believe that war crimes under the jurisdiction of the ICC were committed on one of the vessels, the Mavi Marmara, when Israeli Defense Forces intercepted the "Gaza Freedom Flotilla'' on 31 May 2010" Fatou Bensouda, the Prosecutor of the International Criminal Court, wrote on Thursday.

"However, after carefully assessing all relevant considerations, I have concluded that the potential case(s) likely arising from an investigation into this incident would not be of 'sufficient gravity' to justify further action by the ICC. The gravity requirement is an explicit legal criteria set by the Rome Statute," she added.

Accusing the ICC of being "hypocritical", Ariturk said: "This verdict will trigger Israeli attacks both on Gaza and the humanitarian aid convoys sent for Gaza."