Gov’t looks to reach out to disadvantaged Syrian children 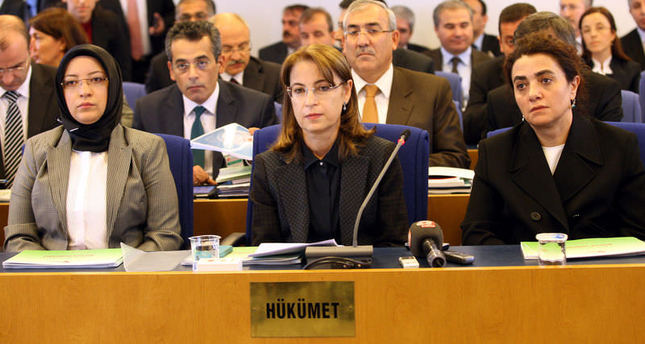 by daily sabah Nov 07, 2014 12:00 am
Minister of Family and Social Policies Ayşenur İslam said that Syrians, especially children living outside the tent camps, are in need of psycho-social support and her ministry will cooperate with local nongovernmental organizations to that end.

Speaking at the Parliament during a debate on displaced Syrians, İslam said that although Turkey's Syrian "guests" in tent camps for displaced Syrians were offered services for psychological therapy and social support and did not have any serious problems, those not living face significant problems. She stated that children living with their families in the camps did not have any important problem regarding trauma inflicted by the conflict in their home country.

The minister stated that they set up accommodation centers for children between the ages of 15 and 18 from Syria who do not have any legal custodian and they were working on a new project to reach out to children below the age of 13. "We will expand our efforts further in the coming months. One of the first centers for the accommodation and care of orphaned Syrian children will likely be set up in Gaziantep," she said. Gaziantep, located near the Turkish-Syrian border, is home to a considerable number of displaced Syrians as well as 33,328 others staying in tent camps in the province. "We established large-scale facilities to accommodate unaccompanied children. The efforts are proceeding well but we seek support from locals and nongovernmental organizations to locate and help more children," she said.

İslam said Syrian families with single parents were hesitant to hand over their children to state custody and they needed to promote the social services offered for Syrian children better to convince them.

Turkey is home to nearly 1.6 million Syrians and over 221,447 Syrians living in tent camps built by the Turkish government in provinces near the Turkish-Syrian border, while others either reside in their own homes, in rental houses or squat in abandoned buildings and parks.

İslam said in her earlier statements that the ministry operated 70 houses across the country that hosts unaccompanied Syrian children. Their adoption by Turkish families remains a complicated issue as an international agreement was needed to enable the adoption.

The facility that will be opened in Gaziantep will have a capacity of 100 people and will be followed by the construction of more facilities.