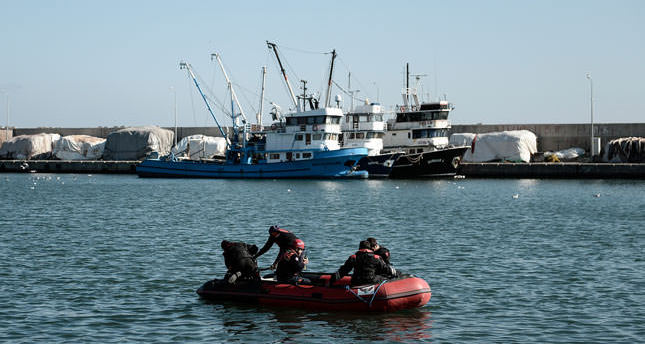 A total of 25 people who were reported to be undocumented Afghan immigrants were killed when a small boat carrying them capsized off the northwestern tip of the Bosporus on Monday. Six people survived the disaster while search and rescue efforts still continue for 12 missing people.

The deadly accident puts Istanbul in the spotlight as an emerging departure destination for immigrants, who usually prefer the Aegean Sea in western Turkey for their journey of hope to neighboring European countries.

An investigation is underway into how over 40 people crammed onto a 12-meter-long boat managed to cross the Bosporus without being detected. One of the suspects arrested in connection with the accident said in his interrogation that they actually left from the Asian side of Istanbul, from a point right opposite the location where the boat sank.

Although the capsizing of overcrowded migrant boats is a common occurrence especially in the Aegean Sea, such accidents have been rare in Istanbul. Most migrants come to Istanbul either to work illegally or as a stop before heading by land to the northwestern Turkish border with Bulgaria and Greece.

The accident also raises questions on how so many people met and boarded a boat without alerting security forces. Turkish media reports that the migrants traveled to Iran from Afghanistan and then sneaked across the Turkish border with Iran in the east. They then traveled thousands of kilometers, again without being detected by authorities, to Istanbul and were reportedly seeking to reach Romania via that country's Black Sea coast.

Media reports have claimed the migrants originally departed from Bakırköy, a large district on Istanbul's Marmara coast, to the south from the incident site. It dots the city's long coastline stretching to the Bosporus in the east. The district is located near Zeytinburnu and Fatih, two places popular with impoverished migrants working illegally. Kumkapı, a neighborhood in Fatih, has many migrants from Afghanistan and African countries. Locals claim they are attracted to the neighborhood by human traffickers promising to take them to Europe. Migrants often disappear after a brief stay in the neighborhood and presumably travel to Europe by illegal means, either in the back of trucks or on foot from Edirne, a Turkish border province in the northwest.

Turkish police arrested two suspects on Wednesday in connection with the boat accident. The suspects, who are both Turkish nationals, were arrested on charges of human trafficking and deliberate negligence causing death. A third suspect remains at large.

One of the suspects is accused of finding the boat for the smugglers and the other is the owner of the boat, according to the Turkish media.

Serkan U., the suspect charged with acting as a middle man between the boat owner and the smugglers, told prosecutors investigating the case that the boat left from Riva, a village in the north of Istanbul's Asian side.

He said in his questioning that he personally knew Kerem S.Ç., another suspect at large. He claimed that the captain asked for his assistance in buying a boat for Abdullah Ş. "We made a deal and I was paid a fee for negotiating the purchase. Kerem later had the boat licensed for Doğan O. - the second suspect in custody," he said.

The two men then met the boat's captain and an unidentified foreigner. Serkan U. said they took the boat to Riva. "Then, a white van arrived and a large number of people got out. I told Kerem that the boat would not be able to carry so many people but Kerem told us to stay," he continued. Serkan U. said the boat's captain telephoned Kerem after they departed and told him that the migrants wanted to return. Kerem told him to proceed and about one hour later, the captain called again and told them the boat was sinking. "He told us to notify the Coast Guard but we were afraid that the Coast Guard would capture us. He later called the Coast Guard and disappeared," Serkan U. said.

The police also questioned the survivors of the accident. Gafla Ahmetzai, one of the survivors, told police he was planning to travel to Germany from Romania with his family. "We traveled to the coast in a van and arrived on the coast in two hours. We were lying on the floor of the van so that no one could see. [The smugglers] told us a large boat would take us to Romania but we saw a smaller boat," he said. Ahmetzai said the boat capsized "because of the storm" and they survived thanks to the lifejackets they wore.

In a related development, the Coast Guard captured 11 Afghan illegal immigrants off the coast of Bodrum, a town in the southwestern Turkish province of Muğla yesterday. Officials discovered the immigrants including a pregnant woman and three children aboard a 2-meter long boat steered by a 15-year-old Turkish citizen. The immigrants were heading to the Greek island of Kos located near Bodrum when they were captured.