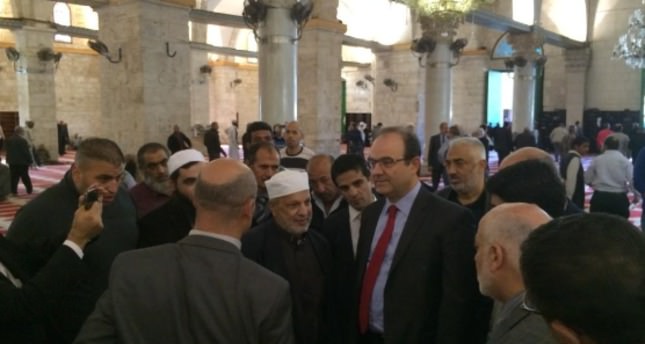 by Daily Sabah with AA Nov 08, 2014 12:00 am
The president of The Turkish International Cooperation and Development Agency (TİKA), Serdar Çam, has visited Islam's sacred Al-Aqsa Mosque in Jerusalem, which has recently been the site of clashes between Israeli police and Palestinians.

Çam and the accompanying delegation talked to Palestinian officials at the Mosque, and were shown damages from the clashes. Çam and representatives of local non-governmental organizations have evaluated the joint projects.

Çam will arrive in Gaza on Sunday and lay the foundation stone for a TİKA-funded residential project, including 1,000 housing units, Mohamed Mortagi, TİKA's Gaza representative, told Anadolu Agency. "TİKA is covering the infrastructure costs of the project's three residential areas and building the housing units," he said. Çam will also open seven water wells dug with Turkish funding, he stated.

The TİKA chief also plans to distribute financial assistance worth a total of $2 million to needy Gazan families, he added. Çam is further expected to visit Gaza City's eastern Shujaya neighborhood, which was devastated during Israel's recent 51-day military onslaught on the embattled enclave.