Atatürk commemorated on 76th anniversary of his death 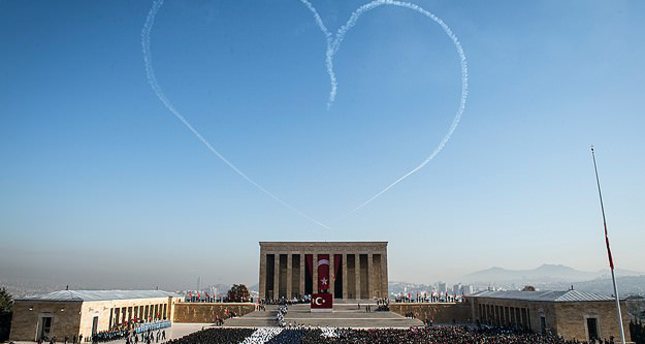 by daily sabah
Nov 10, 2014 12:00 am
Turkey yesterday marked the 76th anniversary of the death of Mustafa Kemal Atatürk, the founder and first president of the Republic of Turkey, with commemoration ceremonies across the country

The country's leaders yesterday attended commemoration ceremonies for Atatürk, one of the most revered figures in Turkey, while life came to a standstill across the country at 9:05 a.m., the time of the legendary leader's death on Nov. 10, 1938.

A high-profile ceremony was held at Anıtkabir, the mausoleum of Atatürk in the heart of the Turkish capital of Ankara. President Recep Tayyip Erdoğan, Prime Minister Ahmet Davutoğlu and other high-ranking officials laid wreaths at Atatürk's grave. President Erdoğan wrote in the memorial book at the mausoleum that Turkey was "closer than ever to achieving the goals of Gazi Mustafa Kemal and his friends," referring to Atatürk by his title "Gazi," which means "veteran."

"Turkey's steady growth in its economy, advanced democracy, peace and prosperity remain focused on these goals. We will continue to expand the heritage we have taken from him and our martyrs," he also wrote.

Erdoğan and Davutoğlu later attended a commemoration event at Ankara's ATO Congresium hall. Speaking there, President Erdoğan said, Atatürk "was unfortunately exploited by people from different ideologies for the purposes of spreading their own propaganda."
"The revered memory of Gazi Mustafa Kemal Atatürk was exploited in attempts to legitimize efforts undermining our national unity, democracy and solidarity," he said, referring to past military coups whose perpetrators cited the laws drafted in the Atatürk era as a pretext to overthrow the democratically elected governments. Erdoğan said introducing Atatürk to children and the youth "in a simple way and in a way underlining his leadership qualities" was one of his greatest desires. He said Atatürk's life story was "warped" after his death. "His life before the Republic was largely ignored and everyone portrayed him for her or his own purpose, for their own ideologies. Both Atatürk and the Republic of Turkey has a longer history than that," Erdoğan said. "We are looking forward to a new Turkey where Gazi Mustafa Kemal will be taught as a statesman, a human being defending the national will rather than a a figure who is exploited for ideological means," he said.

Prime Minister Ahmet Davutoğlu said at the same event that Atatürk was "one of those leaders who left an indelible mark on history."

"Such leaders have one distinctive feature and that is self-confidence. It was evident in Atatürk as well, for instance, when he said that 'as they have come, so they will go' when the navies of the occupational forces anchored in Istanbul. Secondly, he put a lot of trust in his nation. He was confident that the people would help the struggle for independence." Davutoğlu praised Atatürk's vision in his speech. "His contemporaries advocated the notion of being a vassal state but Atatürk, though he noted the facts forcing (Turkey) to be a vassal state, envisioned a fully independent and sovereign country," he said.

Davutoğlu stated that they were pursuing the principles Atatürk implemented for modern Turkey. "The first principle is national sovereignty and basing the regime on the nation's will rather than the demands of any (undemocratic) force or foreign power. The second principle was having economic independence and that is a vision we still continue to have while aiming for inclusion in the world's 10 largest economies. The third principle was to achieve the level of modern civilizations. Apart from scientific advancement and advancement in other fields, this principle means to have a dignified place in the international community. In this context, the Republic of Turkey recently restored its international reputation," he said.

The solemn ceremony was marked with a minute's silence that was also observed across the country at 09:05 am. Sirens of police vehicles, ambulances, ships, fire trucks wailed while people walking on the streets stopped and observed one minute of silence. In Istanbul, motorists got out of their cars and observed the silence to honor Atatürk's memory while they were driving on busy highways during rush hour. Flags across the country were flown at half-mast.

In Istanbul, Dolmabahçe, an Ottoman palace where Atatürk spent his last days, was at the center of the commemoration events. The room where the revered leader passed away was opened to visitors as is the tradition after a remembrance ceremony. Visitors, who formed a long line to see the room, left carnations in the color of Turkish flag on Atatürk's bed. Elsewhere in the city, crowds formed human chains in Beşiktaş district on the European side and Kadıköy on the Asian side in memory of the late founder.

Atatürk, credited with the establishment of modern-day Turkey after the fall of the Ottoman Empire, died at the age of 57 of cirrhosis of the liver in 1938. Rapidly rising in the ranks of the Ottoman army, Atatürk, then simply known as Mustafa Kemal Pasha, was elected as the leader of the country's struggle for independence in the aftermath of World War One. After the defeat of occupying forces from European countries, Atatürk, flanked by his comrades-in-arms, initiated a series of reforms to transform the country that had been left devastated by war. His first step was the foundation of the Republic of Turkey in 1923. It was followed by modernization efforts and the restoration of economic growth.