Panel on women victims of war focuses on Syrians’ plight 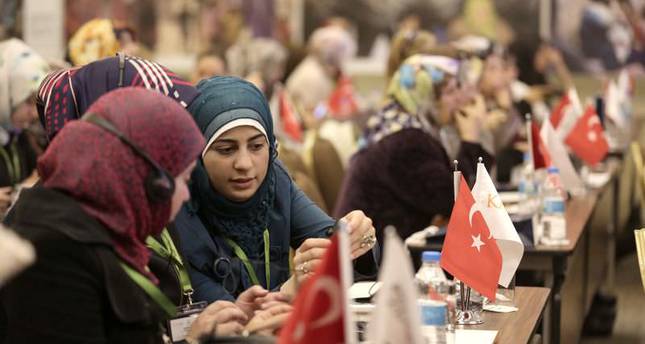 by daily sabah Nov 10, 2014 12:00 am
Participants discussed the ordeal of women of conflict-ridden Syria at a panel which was held in the southeastern Turkish province of Gaziantep yesterday.

The event entitled "Women Victims of War" focuses on women from Syria where a four-year-old conflict has killed thousands and forced millions to flee to Turkey and other countries in the region.

Ingibjorg Gisladottir, a regional office representative of U.N. Women in Turkey, said at the panel that the situation of Syrian women remains in the spotlight in terms of the conflict's effects on women. She said women and children made up a large majority of Syrian refugees and noted that women were traumatized and in immediate need of psychological and social support. Gisladottir said the problems women faced such as crimes including sexual violence, forced early marriage and human smuggling should be addressed by the international community. She also underlined the plight of women who are not currently residing in refugee camps and said that they need special attention.

Speaking at the event, KADEM President Sare Aydın Yılmaz said Turkey did not ignore the female victims of the war and carried out its responsibilities. "These wars are started by men but women suffer the most. They are also the ones who heal the wounds. I am assured that women will lead the efforts for the normalization and prosperity of Syria once the conflict ends," she said at the panel.

Sare Davutoğlu, wife of Prime Minister Ahmet Davutoğlu, told the panel that everyone needs to empathize with the Syrian guests of Turkey. "The majority of them live outside the camps so, we need to mobilize the public to help these victims of war," she said. Davutoğlu said women and children have been the most vulnerable individuals in the conflicts. She criticized the silence of the international community "that has failed the test of empathy."

"Turkey has provided shelter for women and children fleeing the war but naturally this is not enough. They have serious problems and needs. We have duties to fulfill until they return to a safe, peaceful Syria," she said. Further criticizing the international community for limited aid to Syrians, Davutoğlu said no one "can remain silent once they've seen that pictures of fragile, elderly women who had to almost crawl while fleeing into Turkey from Syria's Kobani."