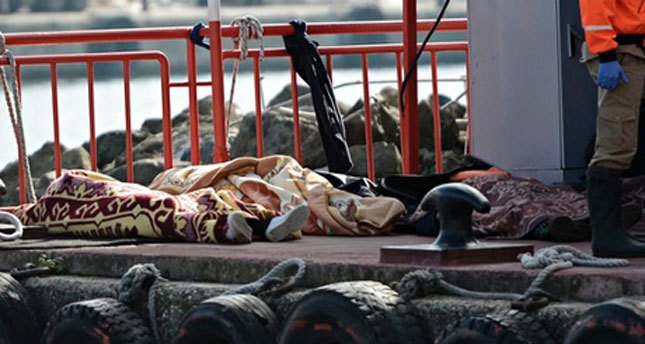 by daily sabah
Nov 12, 2014 12:00 am
Istanbul Coast Guard officials announced yesterday that the number of casualties from a migrant boat that capsized off the Istanbul coast on Oct. 3 rose to 27.

Authorities said that the body of a 5-year-old girl was found at the confluence of the Black Sea and the Bosporus during search and rescue efforts that have been continuing since the incident. A local fisherman discovered the body, according to reports.

Afghan immigrants and the Turkish captain of a small boat that was overcrowded when it sank off the coast of the Rumelifeneri district in northern Istanbul were killed in the incident and only six people were rescued.

Police captured the Turkish suspects accused of attempting to smuggle the migrants to Romania via the Black Sea after departing from Istanbul. Another suspect who allegedly masterminded the smuggling operation remains at large. Turkish media reported that the suspect at large was released on the condition of a judicial review two months before the incident on charges of human smuggling in an operation against smugglers who attempted to transfer 461 illegal immigrants to European countries through Turkey. According to two suspects arrested earlier, the suspect - identified as Murteza Haşimi - phoned the Coast Guard after the boat sank and later fled.

Smuggling illegal immigrants is a lucrative business for human traffickers. Afghan immigrants interrogated by police after the Bosporus accident said they paid 7,000 euros per person to the smugglers.

Turkey is a major transit hub for illegal immigrants from Asian and Middle Eastern countries who dream of a better life in Europe. A report by the Parliament's Human Rights Committee released on Monday revealed the extent of smuggling operations. The report focused on illegal immigrants in Edirne, a northwestern Turkish province neighboring Greece and Bulgaria. Immigrants pay smugglers fees ranging between $200 and $20,000 to sneak into European countries. They often travel to Greece and Bulgaria by foot and hiding in trucks. The committee's report also indicated that gangs operate in Edirne's districts near the border and in Istanbul.

The report urges the authorities to increase punishment for smugglers who are usually only given one-year prison terms. The report's authors also claimed that the slow legal process hindered efforts to effectively combat the smugglers' criminal activities.