Gov’t vows strict measures after arrests made over mine disaster 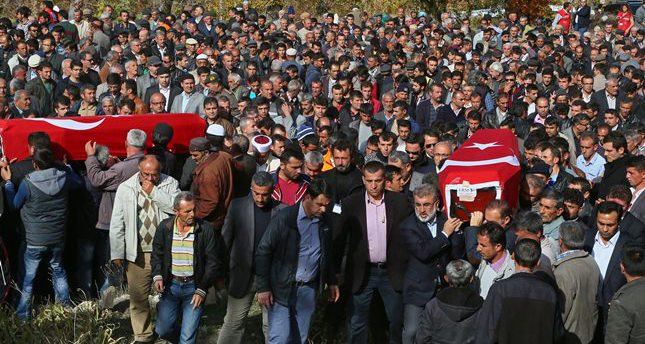 As an investigation into the mining disaster on Oct. 28 in Ermenek, a district of the central Turkish province of Karaman, wrapped up, a court ordered the arrest of five people relating to the incident.

A total of 34 workers were in the mine when an outpouring of water inundated the site, located some 400 kilometers south of the Turkish capital of Ankara. Initial findings indicate that the water, which has accumulated in the mine, leaked into an abandoned coal mine adjacent to the existing mine. The indictment is based on this initial investigation that shows that the mining company ignored the potential threat of a flood from this abandoned mine. However, Uyar rejected the allegations and said they could not have predicted such a disaster, and his lawyer has accused the mining authority not supplying them with the map of the old mine.

Energy and Natural Resources Minister Taner Yıldız, who is coordinating the efforts to retrieve the trapped miners, told reporters yesterday that Prime Minister Ahmet Davutoğlu would announce "radical" regulations for all sectors, particularly mining, in terms of labor safety. He said that 94 coal mines were shut down since May, following a disaster in the western Turkish town of Soma where 301 miners were killed after an explosion trapped them in a mine. "Inspectors from the Ministry of Labor and my ministry found shortcomings in those mines regarding the labor safety and they were shut down until those shortcomings are addressed. I would like to assure you that we look into all aspects of safety in workplaces," Yıldız said. The catastrophic incident in Soma brought mine safety into the spotlight, forcing the government to launch an action plan to tackle the issue of workplace safety that has plagued the mining and construction sectors and led to a high rate of fatalities. Though Turkey has regulations in place to ensure work safety, accidents still regularly claim lives. Officials say regulations are "more clear" than in the International Labour Organization (ILO) agreement, which critics have called on Turkey to implement, and they are meticulous in risk assessment and inspection regarding dangerous sectors such as construction and mining.

On the incident in Ermenek, Yıldız said the proximity of the new galleries in the mine and those in the abandoned mine was "6 to 7 meters," and added, "This is a mistake and whoever committed it, committed a crime."

Also speaking on the current status of search and rescue efforts, Yıldız said they hoped to reach the trapped miners soon although the movement of water complicated the work. "We don't know where the floodwaters could have carried them," he said.

Bodies of Kerim Haznedar and İsa Gözbaşı were found last Thursday some 146 meters underground while the fate of 16 others in the mine remains unknown on the 15th day after the incident. A total of 16 other workers had managed to flee to the surface as the waters flooded the mine.