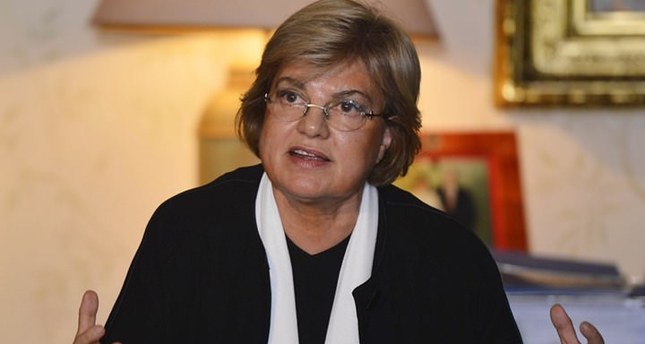 by daily sabah
Nov 17, 2014 12:00 am
Tansu Çiller, whose coalition government collapsed after a military intervention in 1997, did not attend a hearing on the coup for the third time yesterday, citing health reasons. The court has ordered Çiller, who served as a deputy prime minister at the time, to testify as a "victim" of the coup but Çiller has told the court in two previous hearings that she could not attend due to health reasons and for a trip abroad. The court accepted her excuse and ruled for summoning her again for the hearing adjourned to Dec. 19.

Çetin Doğan, a former general who was among the defendants released earlier pending trial, did not attend the hearing although he came to the courthouse in Istanbul when he learned that Çiller would not be present.

A total of 103 defendants, including former top generals, were released in the trial of the Feb. 28, 1997 coup, which was branded as the "postmodern coup" because it did not involve imprisonment or execution of politicians as was the case in previous coups. Defendants are being tried pending trial although their increasing inattendance in hearings has prolonged the legal process.

Tansu Çiller, 68, was elected in 1993 as Turkey's first female prime minister. As the head of the now-defunct True Path Party (DYP), she formed a coalition government with the Welfare Party (RP) in 1996. Under Erbakan's tenure as prime minister, Turkish Armed Forces and the country's secular elite launched a campaign against the RP's alleged Islamist tendencies they perceived as a "threat to secularism." A massive witch-hunt against conservative members of society culminated in the collapse of the RP-DYP government in the wake of a February 1997 military memorandum. Çiller's political career saw a decline after the coup and she withdrew from political life after the DYP's defeat in 2002 elections.

The investigation into the coup started in 2012 after a parliamentary subcommittee was formed to look into the coup. A wave of arrests followed the launch of the probe. Çiller was summoned by a prosecutor overseeing the case in 2012 both as a "witness" and a "victim." She told the prosecutor that she was aware of a coup attempt and advised Erbakan to dismiss army commanders. "He refused on the grounds that President Süleyman Demirel would not ratify the dismissal," Çiller said in her 2012 testimony. She had claimed that she was the victim of a defamation campaign after she discovered the covert activities of a group in the army known as the "Western Work Group," which is accused of laying the groundwork for the coup. Çiller, on the other hand, did not file any complaint against the defendants.