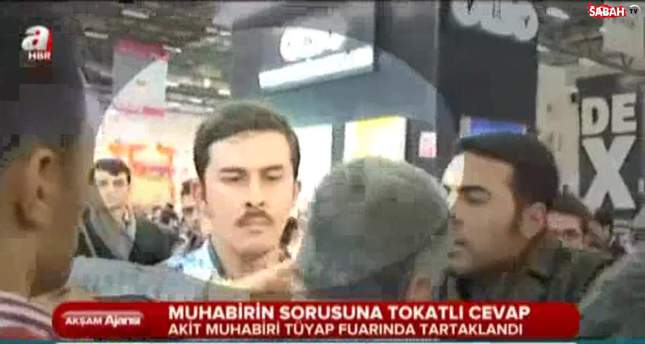 Ekrem Dumanlı, editor-in-chief of the Gülen Movement-affiliated Zaman daily faces criticism for attempting to attack a reporter from Yeni Akit daily who was battered by Dumanlı’s entourage

A reporter from Yeni Akit daily was harassed by Ekrem Dumanlı, editor-in-chief of Gülen Movement-affiliated Zaman daily while his entourage slapped and battered the reporter during a book fair.

Mehmet Özmen was visiting a stand at the 33rd Istanbul Book Fair on Sunday where Dumanlı had a book signing. Özmen approached Dumanlı for a brief interview but was confronted by the editor-in-chief and his entourage who vented their anger on the journalist when they found out he was from Yeni Akit, a newspaper known for severe coverage of the Gülen Movement.

Speaking to Daily Sabah, Mehmet Özmen said he was at the book fair with his cameraman for a video news story to be published on Yeni Akit's website and were conducting interviews with publishers when they encountered Dumanlı. "I wanted to conduct an interview with him as well. As I asked him the first question, he panicked and stood up in anger. He called me a hypocrite [and attacked me]," Özmen said.

Özmen disputed the allegations that he provoked Dumanlı. "As you can see in the video footage of the incident, Ekrem Dumanlı started it all, thus, the real provocateur," he said. He also noted that supporters of Dumanlı launched a black propaganda campaign against him after the incident and accused him of being a provocative journalist. "I stand by every news report I prepare. They already filed over 50 lawsuits for my other news stories just to silence me, but they failed, as I was acquitted. I believe they thought they would finally accomplish this by attacking me physically, but I will not step back. I will continue my struggle against this parallel structure, these traitors," Özmen said.

On what angered Dumanlı so much that he tried to grab his throat while one of Dumanlı's bodyguards slapped him, Özmen said it was his question about Gülenist support for opposition parties. "Before the March 30 local elections, it was reported that Gülenists supported both the opposition Republican People's Party [CHP] and Peace and Democracy Party [BDP]. We found out that members of the Gülen Movement asked people to support the BDP in Bitlis [an eastern city]. Gülenist media [outlets] denied this. However, in an interview with [journalist] Ahmet Hakan, Dumanlı confessed that the movement supported the BDP in elections. I asked him about this issue and this got on his nerves apparently," he said.

The video footage of the incident appears to confirm Özmen's account. As soon as the reporter asked the question, Dumanlı jumped on his seat and called him a hypocrite while two men in his entourage started shoving Özmen. Dumanlı tried to grab Özmen's throat while a man standing next to the editor-in-chief slapped Özmen.

In his column published on Monday, Dumanlı did not mention the altercation with Özmen, although he accused Özmen, without mentioning his name, of inciting provocation. The English version of the column on the website of Today's Zaman, was titled "You should exonerate yourself first," with Dumanlı articulating his problem with the question while ignoring the attack again.

Gürsel Eser, the president of Turkish media union Medya-İş, issued a statement condemning the attack. Eser said Dumanlı and his entourage's attack on Özmen would be remembered as "a dark episode" in the history of the Turkish press. He said it was sad that a journalist dared to attack a fellow journalist. "As an editor-in-chief, caring for the honor and dignity of hundreds of staff working for him, Dumanlı is also responsible for being sensitive toward other journalists. I would like to ask Dumanlı how he can defend press freedoms while slapping a journalist for asking a question he did not like," Eser said. He stated that Dumanlı's defense that Özmen was attempting to stir provocation did not justify the attack. "We condemn Ekrem Dumanlı for this act and call him to apologize to Özmen and the Turkish press," he said.

Dumanlı, a prominent supporter of the Gülen Movement, is the editor-in-chief of Zaman daily, which has been heavily critical of the government since last year in the wake of the Dec. 17 operation. The government has launched efforts to wipe out Gülenists from key posts in the police, judiciary and government agencies after a plot by Gülenist involving wiretapping of political leaders and journalists was revealed. Described as a "parallel structure" by President Recep Tayyip Erdoğan, Gülenists are accused of attempting to overthrow the government through its members embedded in the country's institutions.

Intolerable of criticism, the movement, headed by Pennsylvania-based cleric Fethullah Gülen, is accused of imprisoning its critics through sham trials by prosecutors and judges linked to the group. Most notably, journalists Ahmet Şık, Nedim Şener and former police chief Hanefi Avcı were jailed for releasing books critical of the Gülen Movement. Released after a prolonged jail term without reasonable cause, Şık, Şener and Avcı claimed they were targeted by Gülen-linked prosecutors and judges who leveled charges of being members of a terror network without any concrete evidence.