Syrians given means to adapt to life in Turkey 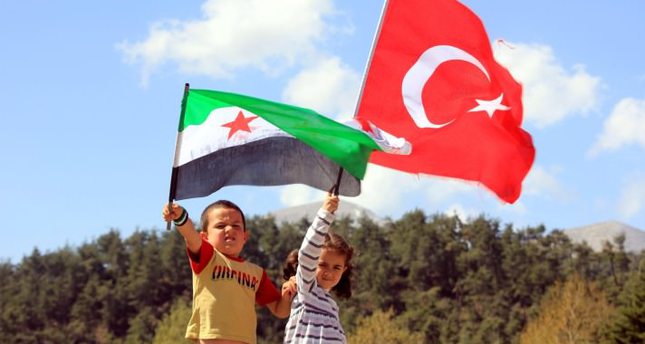 by AA
Nov 17, 2014 12:00 am
"As the situation in my country is getting worse every day, it is not possible for me to go back. So, I should get used to living here," says 19-year-old Syrian Beyyan, who has been residing in Istanbul for about a year.

Beyyan is only one of thousands of Syrians who have fled their war-torn country. She has been trying to adapt to life in Turkey, which currently hosts around 1.6 million Syrians, according to UN figures. Last week, Deputy Prime Minister Numan Kurtulmuş said that the Syrian presence in the country was in fact not "temporary." "It seems they will remain here after three-and-a-half years of this civil war," he said. "We will work much more for their integration now." Turkey has adopted an open-door policy, thus welcoming Syrians since the beginning of the civil war in March 2011. The government hosts them under temporary protection regulations, which enable "unlimited stay, protection against forcible returns and access to public medical healthcare."

The financial cost of their presence on Turkish soil has reached $4.5 billion, Finance Minister Mehmet Şimşek announced last week. "[Syrians and Turks] should get used to living together," says Associate Professor Murat Erdoğan, director for the Migration and Politics Center at Ankara-based Hacettepe University. "Turkey should be establishing long-term policies regarding Syrians before it is too late." The government has recently taken measures to deal with Syrians' extended stays, taking steps to allow access to education and paving the way for granting work permits. According to the Education Ministry's latest regulation in September, Syrians can enroll in primary and secondary school, if they have an ID card from Turkey.

On Tuesday, Minister of Labor and Social Security Faruk Çelik confirmed that work permits would be granted to Syrians on Turkish soil. The minister did not give further details. "We expect a regulation will come in a short period of time, as it is a very critical subject," says Polat Kızıldağ, project assistant for the Association for Solidarity with Asylum-Seekers and Migrants, an Ankara-based NGO. "I think [the work permit] will ease their adaptation into life [in Turkey] and it will decrease their dependence on others." But to truly overcome the obstacles Syrians face daily, Turkish courses are crucial. "Over 53 percent of the Syrians in Turkey are under the age of 18. We should teach them Turkish as soon as possible. It is very important for their education," says Associate Professor Erdoğan. Within this framework, the Interior Ministry's Directorate General of Migration Management launched a project that aims to teach Turkish to Syrians, free of charge. Last week, the first class started in the western city of Afyon. These courses are expected to take place all across Turkey in the near future. "If we can expand these courses across Turkey, we will resolve a very important problem of theirs," Kızıldağ said. Syrian Beyyan, whose Turkish is quite good, readily agrees. Beyyan, who has four siblings, is the only member of her family who is able to speak Turkish. She is the only one able to take care of her family's paperwork. "When I came here for the first time [from Homs], I said that I should learn Turkish to be able to live here and I did. Now, I can handle everything by myself without anybody's help as I can speak Turkish." She wants to be a Turkish literature teacher. With a better grasp of the language, she will be able to go to university in September 2015. Another delicate issue resides in alleged cultural differences between Syrians and Turks. Indeed, more than two thirds of Turks do not think that Syrians will fit into Turkish society, as they believe they have a totally different culture, according to a survey conducted by Hacettepe University. "We should give them training about our culture, our traditions, our values in order to prevent any cultural problems," Veysel Dalmaz, governor of the Prime Ministry's General Coordination for Syrian Asylum-Seekers said. The same survey reveals that 72 percent of the respondents believe that Syrians should only stay in camps in Turkey. "Wise-men committees" consisting of Syrians within Turkey will help deal with perceived differences, Dalmaz states. "This is a draft project, which I plan to offer. The committees will ease our communication with [Syrians] and will help resolve problems easily when it comes into effect," he says.