Cooperation between social sec. inst. and SESRIC to enhance relations 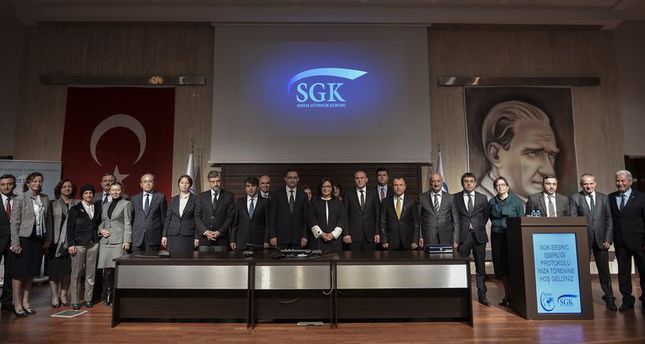 by AA Nov 18, 2014 12:00 am
Turkey's state-run Social Security Institution signed a cooperation agreement on Tuesday with a subsidiary organ of the Organization of Islamic Cooperation: the Statistical, Economic and Social Research and Training Centre for Islamic Countries -- known by its acronym SESRIC.

Chairman of the Social Security Institution Yadigar Gökalp İlhan and Savaş Alpay, director general of SESRIC, signed a joint agreement which İlhan said would enable the sharing and exchange of information between different cultures.

"The institution's efforts in the global arena will continue and it will also cooperate with Mexico, Malta and Finland's security institutions," İlhan said during his speech at the signing ceremony, held in the capital Ankara.

Alpay, for his part, said the member countries of SESRIC had a young population, which he said would be of great value to them in the future, and attached importance to training that young population.

"The applications to be launched by social security institutions for youngsters have importance in terms of occupational health and safety as well as employment," Alpay added.

SESRIC monitors economic and social development and organizes training programs according to the needs of countries.

It does this to boost cooperation among its member countries.