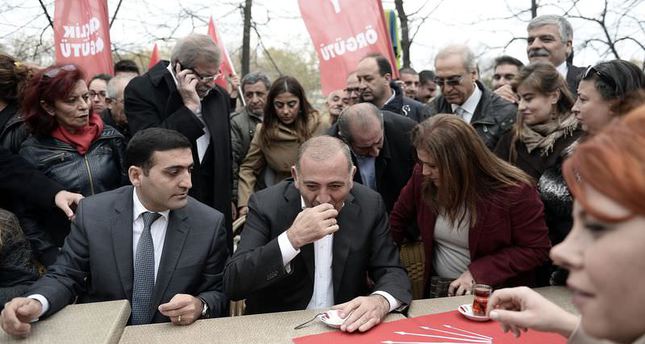 by daily sabah
Nov 20, 2014 12:00 am
Turkey's main opposition, the Republican People's Party (CHP), is planning to start a new protest in Istanbul's Gezi Park, which was the scene of violent riots in 2013.

The past three days have seen important developments regarding the park, situated in Istanbul's central Taksim district. First, a small section of the park facing the street was excavated for the construction of a bus stop. Upon hearing the news, a small crowd from the Taksim Solidarity Platform, the group which was behind the 2013 riots, gathered in the area to protest the foray into the park. Hours later, the municipality announced the construction of the bus stop, which would have seats for passengers waiting for the bus unlike the other, smaller stop, that was scrapped. Then came the announcement of the municipality's 2015 budget, which included redevelopment of Gezi Park. A court halted the project in June 2013 but the municipality has appealed the ruling, which is pending ruling by a higher court. Istanbul Municipality officials said there would be a referendum over the project, even if the appeals court greenlights the redevelopment of the park.

Lawmakers from the CHP, which attempted to hijack the 2013 environmental protest for an anti-government demonstration, only to watch it fall into the hands of violent rioters, were in the notorious park yesterday. CHP Secretary-General Gürsel Tekin and lawmaker Sezgin Tanrıkulu led a delegation descending onto the park amid tight security measures. In a statement, Tekin said the government was seeking to incite riots again "to shift the agenda" while a social media campaign was launched by fringe groups which took part in 2013 riots, calling people to rally in Gezi Park. Tekin criticized the referendum proposal by the municipality and called on the municipality to hold referenda for all other projects as well.
He said that the CHP will "not be a part of a dirty plot (to incite riots)" while Sezgin Tanrıkulu pledged to "defend the park and Taksim Square against redevelopment."

On social media, groups behind the protests and ensuing riots in 2013 criticized the municipality's announcement and called for the cancellation of the project no matter what the referendum may result in, contradicting with their call for democracy and human rights they often referred to in their protests.

Protests over the redevelopment of Gezi Park, to make way for the reconstruction of an Ottoman-era building, started on May 27, 2013. Soon, the small group of environmentalists were joined by more activists and turned into what its supporters called the "Gezi resistance." However, the demonstration also attracted radical groups opposing government policies. On May 31, riot police intervened to evacuate the park where protesters had been camping for days. The intervention, later acknowledged as "disproportionate" by officials, sparked clashes with security forces in Taksim Square. It also caused more riots against police in Istanbul and other cities. Armed with Molotov cocktails, fringe groups and supporters of terrorist organizations exploited the riots to carry out attacks against the police and public buildings.