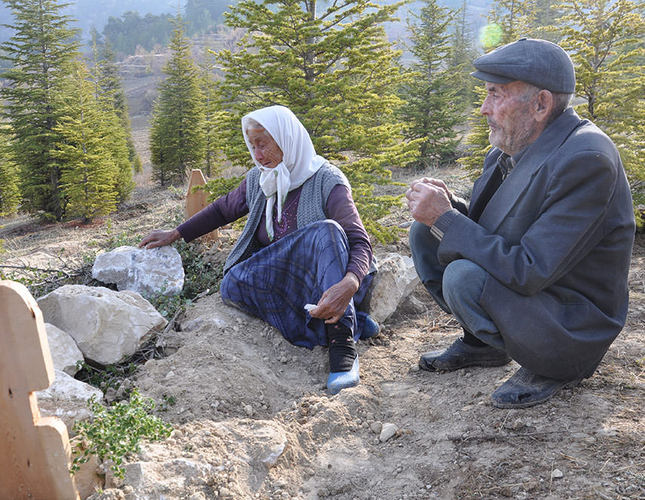 Photos of an old man wearing torn rubber shoes at the funeral of his son who lost his life in the Ermenek mine disaster has caused a public outcry on the man’s unaddressed poverty while the poor father dismissed the issue, saying he was not in immediate need of a new pair of shoes

Recep Gökçe, the father of Tezcan Gökçe, who was among the 10 miners whose bodies have been recovered from a flooded mine in the central Turkish town of Ermenek, made the headlines earlier this week when he was photographed wearing a pair of heavily damaged rubber boots at his son's funeral. His apparent poverty hit the headlines with critics on social media calling on the government to help the old man.

What followed next drew further criticism. It was reported that the local governorate gave a new pair of rubber boots to the man. Along with social media critics, opposition lawmakers jumped on the bandwagon to pile up "shame" on the government for not helping the impoverished family more. The governorate denied the report and said that Gökçe was donated a new pair of regular shoes and a local official assigned to deliver the shoes to the old man, donated the rubber pair as well from his own pocket.

As his boots receive more coverage day after day, Gökçe has moved to put an end to the debate. The elderly man acknowledges his poverty but denies that he needed new boots. Gökçe, a 75-year-old father of five, lives in a two-room, decrepit village house with an outhouse and a bathroom separated from the living room by a curtain and his sole income is a trimonthly pension. As for shoes, both he and his wife only wear rubber boots. This is partly due to poverty and partly due to village life forcing people to wear rubber boots while working in the fields or in the stables.

Gökçe said he does not prefer normal shoes in the village. "I can't wear them to the stable or the orchard. Of course, I have to wear rubber boots. This is my choice and it is nobody's business whatever I wear," he said. Gökçe said he lives in poverty but that he "does well." "People want to help me and ask me what I need. I said I would tell them later but I can't. I am ashamed of asking for help. They offered to give me money but I told them I have some even though I hadn't any. It would be a shame to ask for money. I haven't been paid my pension yet and I could have buy a new pair of boots once I have it," he told Anadolu Agency. "I wouldn't have worn the torn boots at the funeral if I had new ones. It is not appropriate. But I couldn't afford to buy new ones at that time," Gökçe added.

Gökçe prides himself in taking care of his family with little money and vows to not leave the wife and children of his deceased son in despair. The Turkish public, on the other hand, was quick to pour in aid to the needy family. Osman Gökçe, an elder brother of Tezcan Gökçe, said people all across the country called them after his father made the headlines and offered to help them. "We thank the Turkish nation and our government for offering financial and spiritual help to our family," he said.

The Gökçe family first made the headlines when Ayşe Gökçe, wife of Recep Gökçe, caught the nation's eye after her teary remarks in an interview before the recovery of her son's body from the mine. "He didn't know how to swim. I wonder how he is doing now," the grieving woman said in tears in the interview.

Tezcan Gökçe was among 18 miners trapped in the mine in Ermenek, a town in the province of Karaman. Eight miners have yet to be recovered from the mine that flooded on October 28.