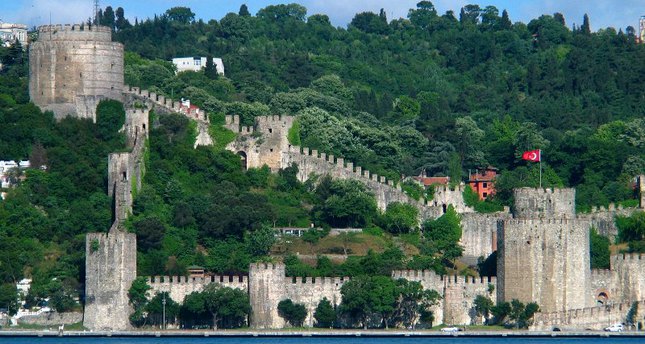 by Daily Sabah Nov 21, 2014 12:00 am
Istanbul Municipality officials warned authorities that Rumelihisarı, an Ottoman-era fortress overlooking the Bosporus, is at risk of collapsing, according to a report in the Turkish daily Vatan.

The fortress, visited by thousands of tourists every year, was found to be unsafe by experts last year due to damage on its walls. The experts warned that some parts of the 15th century structure located on a hill drifted toward the outskirts due to damage.

The municipality urged a state-run agency overseeing the preservation of historical landmarks to shut down the damaged areas to public access, at least until maintenance work is done. According to Vatan, no maintenance work has been conducted for one year. A report prepared by municipality officials after examining the site last June advised the entire fortress to be shutdown as it posed a safety risk. The state-run Provincial Directorate of Culture and Tourism agreed on the closure of some sections of the fortress starting from Aug. 30 while other parts not in danger of immediate collapse remain open. The municipality's advice was conveyed to the Ministry of Culture and Tourism and the ministry will decide whether it will be closed.

Rumelihisarı, located in Sarıyer district on Istanbul's European side, was built between 1451 and 1452 upon the order of Ottoman Sultan Mehmet II, one year before the conquest of Istanbul by the Ottomans.