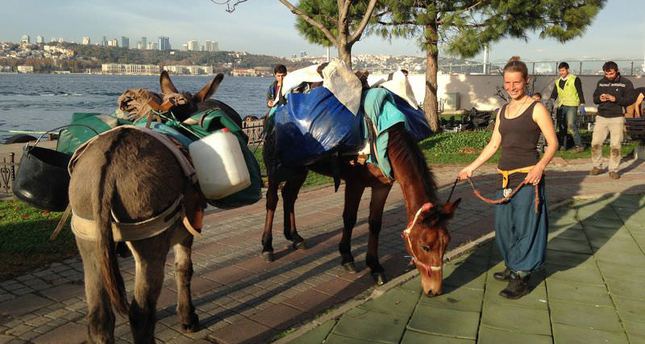 by daily sabah
Nov 21, 2014 12:00 am
A French couple traveling the world on a donkey and mule was frustrated by one petty rule in Turkey: No animals are allowed on the bridge.

David Verchot and Morgane Lefevre arrived at Istanbul's Bosporus Bridge on Thursday to cross to the city's European side from the Asian side on their way to France. However, bridge police stopped the couple mounting a mule and a donkey, to the amazement of Verchot and Lefevre who argued with police officers.

The couple had arrived in Turkey from Iran three months ago after traveling 11,000 kilometers during a world tour they started in 2010. Verchot and Lefevre, who run a restaurant in France, ditched their cellphones and have little money to spend for the world tour. As a result, they apparently forgot to look up regulations about animals using the busy roads and bridges. They first tried to cross to Istanbul's European side via ferry but the animals were not allowed aboard. They then proceeded to the bridge, hoping they would be able to cross. Policemen on the bridge told the couple to turn back and load their animals on a truck to cross the bridge. Lefevre and Verchot told the police they had no money to pay for a truck and asked for the police to help. The police advised them to take Fatih Sultan Mehmet Bridge in the north, kilometers away from the Bosporus Bridge. The frustrated couple then headed to a forest near the bridge to spend the night in tents. It is unknown whether they were able to finally reach the European side.