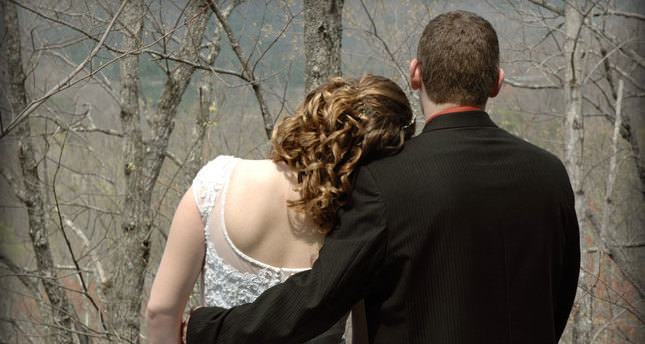 by AA
Nov 22, 2014 12:00 am
So-called "child brides" in Turkey, girls married off at an early age, told their harrowing stories when they were interviewed for a survey on the disturbing phenomenon. The Dicle Social Studies Center (DİTAM), based in the southeastern Turkish province of Diyarbakır, conducted a study in the country's southeastern provinces on the social legitimacy of early marriages for girls as young as 14. For the survey, 184 women were interviewed in Şanlıurfa, Siirt and Diyarbakır, three provinces in the southeast. Emel, one of the women interviewed in Şanlıurfa, said she felt like a guest at her own wedding. "I was like an animal prepared to be slaughtered," she told the interviewers. Aynur from Siirt, like all of the other girls, did not want to be married. "But they (her family) think I am only in love with someone other than the husband they found for me. You can't raise your voice against them," she said, pointing to the strict patriarchal culture that plays a major role in forced marriages. "It is difficult, really difficult. After all, you have to spend a lifetime with someone you don't love," she said, adding that she longed to go to school like girls her own age. Hayriye, another girl from Siirt, was the victim of the "berdel" tradition that is also known as a "parallel wedding." It refers to marrying daughters of two families to marry the sons of the other in the same ceremony, and if one couple decides to get divorced, the other has to break up according to this warped tradition. Hayriye was married to her cousin. "In her will, my aunt instructed my father to marry me to her son. When she died, my father had me married to my cousin to 'honor' his sister's will," she said. According to DİTAM's study, early marriages, "a serious problem" for Turkey, has social legitimacy despite an official ban. Social values prevalent in the public and economic factors are major factors behind those marriages. Honor is especially important for families "who see young girls as sexual objects and therefore deem them a risk that may stain their honor," according to the study. So, to avoid the "risk" of having girls run away with a man or simply have a relationship, parents force them to get married at a very early age. Being an unmarried girl past 20 is also "a shameful status" in society, the study's authors said.