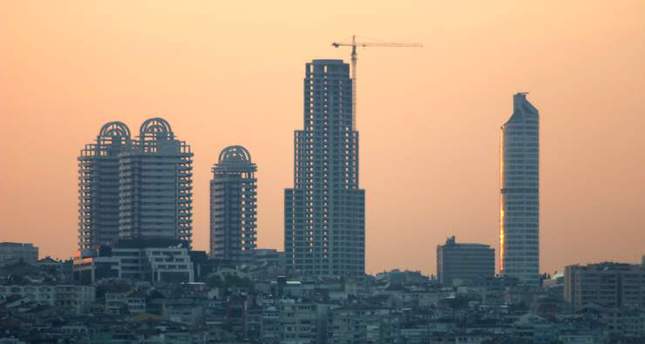 by Daily Sabah Nov 22, 2014 12:00 am
A prosecutor in Istanbul seeks to press charges against the municipality of Zeytinburnu district over its failure to demolish 16/9, a group of skyscrapers criticized for spoiling Istanbul's historic "silhouette." Acting upon the complaint of an unidentified citizen, the prosecutor asked for authorization of an investigation into negligence by the municipality officials in executing the demolition ordered by the Council of State high court. The municipality had launched a public tender for the demolition work after the Council of State verdict but no companies participated in the tender and a second tender was not launched. Municipality officials told Turkish media that the parts of the buildings that should be demolished had to be nationalized first and the building has to be evacuated with a court order. They said the legal process to that extent was still underway and they would launch the second tender after it concludes. In May, the court ruled for demolition of a section of the skyscrapers consisting of 37, 32 and 27-story residences overshadowing Süleymaniye Mosque whose iconic image identifies with the city's history. The construction of skyscrapers was criticized by then Prime Minister Recep Tayyip Erdoğan in 2013 who called on the owners to "trim" the high-rise buildings for spoiling the silhouette.