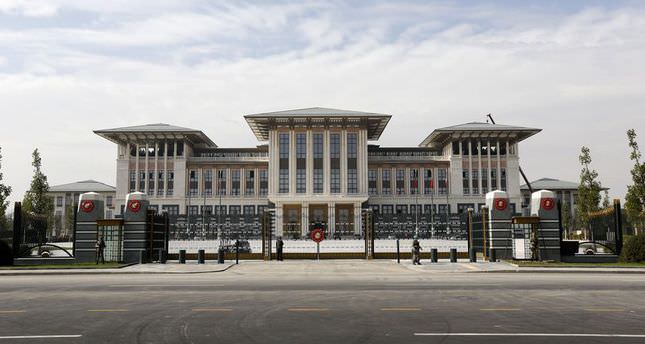 Dismissing criticism about the cost and the size of the new presidential palace in Ankara, President Erdoğan said critics should remember the fact that he didn’t stay at official residences before

President Recep Tayyip Erdoğan, speaking to reporters on the presidential plane on his return from the Turkey-Africa Summit in Equatorial Guinea, said it was wrong to describe the Presidential Palace as "Erdoğan's Palace." "This is the people's palace. It belongs to the Republic of Turkey. It belongs to the nation. Our aim was to leave a tangible legacy to the people," he said. Criticism aired by Western media about the palace is not important, the president said. He said those who described the palace as too ostentatious or its a thousand rooms as unnecessary seemed to have forgotten the fact that he had refused to stay at official residences before.

"I was the mayor of Istanbul for four-and-a-half years and refused to stay at that magnificent mansion in Florya. I lived in an apartment unit in Beylerbeyi. When I became prime minister, I didn't live in the official residence – I chose to rent a unit in Subayevleri, Ankara. No one came out and said, 'Wow. The prime minister is so modest.' The palace was built to leave a tangible legacy. They are saying, 'But it has a thousand rooms.' Of course it does. Those who think small cannot produce such work."

Erdoğan also underlined the serious threat posed by the Gülen Movement, led by Fethullah Gülen, who currently lives in Pennsylvania. On the matter of whether Turkey will ask for Gülen's extradition, Erdoğan said, "We first need to wait for the judicial process to proceed. Once that's known, the steps that can be taken will be apparent. A speedy conclusion of the judicial process is the ideal. I believe with the approval of the judicial reform package, the process will accelerate."

He said the Gezi Park protests, the December 17 and December 25 operations and violent October 6-7 demonstrations were tied to certain groups, which he described as a "supreme mind." He said this supreme mind also used the Gülen Movement to achieve its objectives.

When asked why he felt the need to warn African countries about the Gülen Movement, Erdoğan said the government's fight against the group would continue through all avenues. "If we stopped in the middle, the nation and the country will pay a heavy price. The most comprehensive decision against the group was taken at the National Security Council [MGK]. We took that decision in order to resolve the issue in the international arena. The judiciary is only one angle of the struggle. Friendly countries need to know."

He said African countries had supported Turkey's efforts in this regard, noting that Turkey's enemy was theirs as well. He said Turkey had to develop a strategy to counter the Gülen Movement's international education network. He added that the Education Ministry was working on a model.

Concerning that when he first became president, there were claims that he would be using the presidential authority to head cabinet meetings, Erdoğan said, "That's a constitutional presidential power. There is no way such a power will not be used. God willing, that power will also be utilized in time."

Expecting cooperation from the U.S.

When asked if the U.S. performance as an ally satisfied him, Erdoğan voiced certain reservations. "Our alliance should have focused on the [Syrian] regime. On the matter of Kobani, I warned [U.S. President Barack] Obama about how the Democratic Union Party [PYD] was a terrorist group just like the PKK. Still, that night they airdropped weapons there with C-130s. Some of the weapons were seized by the Islamic State of Iraq and al-Sham [ISIS]. We don't expect such conduct from an ally. We expect cooperation," he said.

Erdoğan noted that during his visit to France, he had talked about the importance of Aleppo. "I asked [President François] Hollande why we are talking only of Kobani. Aleppo is more strategic. The regime didn't strike in Kobani. It hit Aleppo. We should not just talk about a no-fly zone and a security zone or training. We should practice what we preach."

When asked about Pope Francis's visit early next month, Erdoğan said, "No one can deny the pope's influence in the fight against terrorism. We are paying special attention to what he says about Islamophobia and expect him to contribute to the fight against it."

Erdoğan was also asked about the rumors of introducing a mediator in the Kurdish reconciliation process. "We saw this before. We know what happens when a third or fourth factor is introduced. As Kurds and Turks, we have lived together for years. We exchanged brides. As Turks, Kurds, Laz or Circassians we will solve it among ourselves. We can't solve it with American mediation. For years, a British national went to the Qandil Mountains [PKK headquarters]. He was also a third party and didn't help at all. We, as Turks and Kurds, should resolve it ourselves."

He said the PKK had unfortunately failed to respond to government efforts positively and if it did in the future, it might lay down its arms.
Last Update: Nov 24, 2014 9:28 am