A hero’s farewell for a brave Turkish girl in Germany 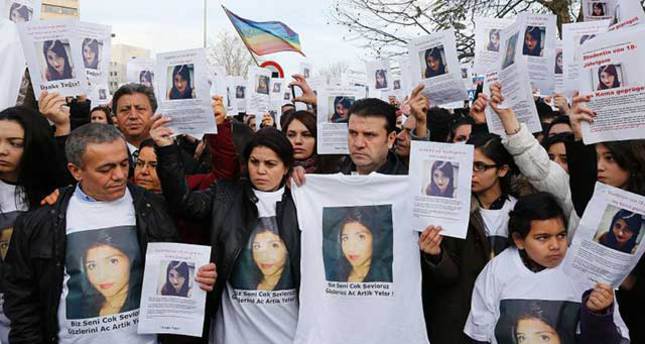 by daily sabah
Nov 29, 2014 12:00 am
Tuğçe Albayrak, 22, lost her life on Friday when her family decided to take her off life support after she was left brain dead by an attack on Nov. 15.
Albayrak was hailed for her courage after she stood up to three Serbian assailants who harassed two German girls at a restaurant she was eating at with her friends in the German city of Offenbach. As she was leaving the restaurant after confronting the assailants, one of the attackers brutally beat Albayrak. She lapsed into a coma for two weeks and was declared brain dead on Nov. 26. Her family approved of taking her off life support on her birthday. The young girl's assailant, a Serbian teenager, was captured after the attack.

After hearing of her death, Tuğçe's friends and supporters flocked to the hospital, holding photos of her and banners reading "thank you" in Turkish and German. Ali Albayrak, her father, told reporters Tuğçe became a "hero" and "a martyr" for standing up to the assailants.

On Thursday, a group of people had convened outside the restaurant where she was killed to stage a silent protest against the attack.

The attitude of passersby during the attack raised outrage in Germany after it was revealed that the trio of assailants had harassed patrons at the restaurant for minutes, but nobody called the police. The restaurant staff also came under fire for not offering water to Albayrak while she was lying unconscious.

Albayrak's relatives also criticized the family of the 18-year-old Serbian assailant. Speaking to Turkish media, they scolded the assailant's family for not even expressing condolences for Tuğçe's death.

An investigation into the incident is underway while the assailant, identified as Sanel M., faces charges of homicide. Investigators are also looking for the two German girls Tuğçe rescued from the assailants.