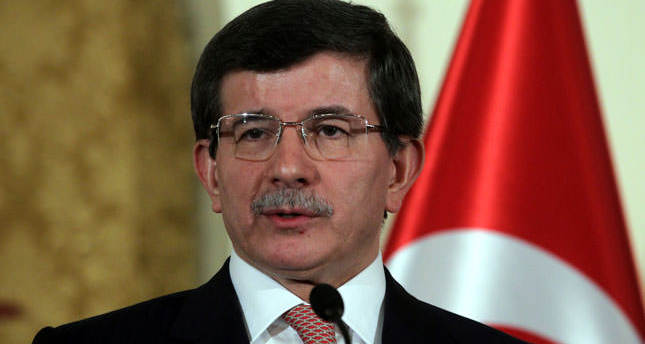 Prime Minister Ahmet Davutoğlu inaugurated the First Council Against Drugs on Friday that will take steps to combat drug addiction in Turkey, vowing to curb drug use significantly

The First Council Against Drugs, which looks to step up efforts against drug use, began on Friday with an opening speech by Prime Minister Ahmet Davutoğlu. The prime minister spoke about the road map to curb the problem and pledged to drop the 2.7 percent drug use rate to at least 1 percent.

Davutoğlu outlined a series of steps that the council will assess and implement ranging from more effective law enforcement especially at schools against drug use and a campaign to raise awareness in families.

Davutoğlu emphasized that drug use is not a problem "limited to a place or a generation" and required a comprehensive struggle for this reason. "Without concrete measures, it will threaten the health of generations. It also boosts the revenues of dealers feeding on this problem," Davutoğlu said.

The prime minister noted that there were currently about 243 million drug addicts in the world. He said that, although the rate of those taking drugs only once was low in Turkey compared to Europe, the problem would grow dramatically in the future if they do not take measures and adopt a serious strategy to combat the problem. Summarizing the efforts of his government and the previous Justice and Development Party (AK Party) government in the past decade, Davutoğlu said Turkey has been party to international agreements on counter-narcotics issues and ratified them, drafted a national policy, established provincial committees for a decentralized approach in combatting drug use, as well as a research committee at the Parliament in 2008. He also added that prison terms related to crimes such as drug dealing were increased significantly this year.

The council in Ankara is bringing together about 2,000 people including ministers and ministry officials, academics and representatives of nongovernmental organizations. In separate workshops on the sidelines of the council meeting, participants, accompanied by families of drug users, local politicians, administrators, journalists, officials from several sports federations and teachers, will discuss how to tackle the issue and offer alternatives to youth drug use.

"We hope to gain better insight by institutionalizing our efforts, backing them with scientific studies and establishing special research units. I must admit that it is not a nice expression but we will draft a 'drug map' in Turkey," Davutoğlu said.

He said that preventive measures will be prioritized and law enforcement efforts would be limited, as they would focus on resolving the issue by treating people rather than threatening them. The prime minister noted that nationwide awareness was essential to that extent and the council's priority was raising this awareness in every segment of the society.

The high-risk group in terms of drug addiction is people between the ages of 15 and 24. Davutoğlu said preventive measures will focus on schools for this reason. "It is not only about the schools, but also their close vicinity. We need a package of measures integrating counter-narcotics efforts at and around schools. This vicinity includes criminals peddling drugs on the outside of the school," he said.

Davutoğlu also emphasized the importance of families in combatting drug use. "Families should not ignore this problem thinking it is simply a fad for their children. It should be treated as a disease and families should receive assistance from experts for its treatment," he said.

Furthermore, Davutoğlu said that a strong family bond was essential "to resolve a drug problem or any other problem for that matter."

"If relations between family members are strong and affectionate, if they can resolve their problems together and it is easier to help youth addicted to drugs," he said, adding, "I call on families to help the affected youth, to open their hearts for them [rather than ignoring the problem and ostracizing them]," Davutoğlu said.

On the narcotics sector, Davutoğlu said they were determined to pursue the struggle against "those profiting from drugs." "We are confronting a network of producers, middlemen and users and we have to break up the relations between these three groups. I already emphasized this, but I would like to reiterate it today: Drug dealers are the most dangerous terrorists for us and their work will be treated as terrorism," he said.

"Another significant problem is the existence of abandoned, ruined buildings that are occupied by drug dealers and users. By the end of 2018, we aim to evict them from these places," Davutoğlu said, and noted that many of these buildings suffered from earthquake damage and are stuck in legal limbo despite court orders for destruction. Davutoğlu also added that accelerating the legal process was of utmost importance to end these criminal activities.

On the rehabilitation of drug addicts, Davutoğlu said an around-the-clock hotline for advice on the treatment of addiction and detection of addicts will be established. "We will establish a chain of authority. First, the hotline will help in the detection of addicts. Secondly, police will intervene to help the addicts and finally, rehabilitation centers will help in their recovery," he said.

According to police and Health Ministry statistics, there are only 24 rehabilitation clinics offering treatment for addicts, with the centers having a capacity of just 623 beds for addicts in need of long-term treatment. That means there is only one bed for every 320,000 drug or alcohol addicts in Turkey.

Last year, over 218,000 people applied to rehabilitation centers for ambulatory treatment while over 8,000 sought inpatient treatment, with many being turned down due to a shortage of beds. What is more concerning is the absence of rehabilitation clinics in the eastern province of Van and Hakkari in the southeast where the number of drug addicts is high, according to experts.

He said the council will convene once every three years to assess the progress in combatting drug use. He said separate committees will also be established at state-run agencies such as the media watchdog and religious affairs directorate to help the efforts.

Another part of the road map in combatting the drugs is "volunteer youth teams." "They will act as a community directing the fellow youth to sports, cultural and social activities rather than drug use. They will also participate in an awareness campaign in neighborhoods, villages and districts," Davutoğlu said.

"We aim to minimize the drug use through these efforts between 2015 and 2018," Davutoğlu said, and admitted that although it may not be possible to eradicate the problem entirely, they will try to at least isolate it and decrease the drug use to 1.5 or 1 percent.

Turkey earlier announced the Rapid Action Plan Against Drugs, which will be coordinated by several ministries, to take steps against drug abuse, especially among high school youth. Turkey will also implement a blanket ban on drugs instead of separate bans implemented at different times against each type of drug. A new bill that passed in Parliament recently had extended prison terms for drug peddlers, particularly convicts caught peddling drugs outside or near schools and those selling drugs to people under the age of 18.

Though counter-narcotics efforts have always dominated the government's agenda, measures were stepped up after the emergence of bonzai, a highly popular synthetic drug, in the past couple of years.