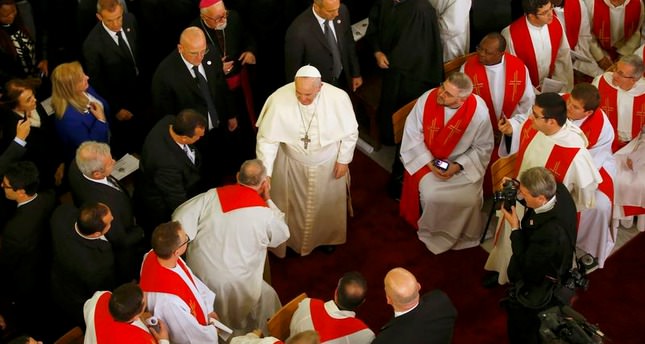 by AA
Nov 29, 2014 12:00 am
Pope Francis, the spiritual leader of the globe's estimated one billion Catholics, has celebrated a special Mass in Istanbul on the second day of his official visit to Turkey.

Security was tight at the Catholic Cathedral of the Holy Spirit in the city's Beyoglu district, ahead of the visit by the 77-year-old Argentinian pontiff, who was greeted by a small crowd of well-wishers before releasing a dove in the courtyard of the church.

Around 200 people were waiting for pope's arrival outside the 1846 church earlier, with Far Eastern visitors being represented more than any other nationality.

One of them was 40-year-old Guang, from China. Already in Turkey for a vacation -- and despite describing himself as an atheist -- he said seeing Pope Francis "was like seeing Madonna live."

"I will not get a chance to see the Pope again. I cannot miss this," he added.

Twenty-nine-year-old Polish national, Aniela Novak, travelled to Istanbul on Wednesday to see Pope Francis. She said: "I have been in Istanbul before but this time I am here for the Pope."

"Most of the people coming here are Christians but there are also many Muslims. It is really interesting and I see peace here," she said while queuing for the Papal Mass at Istanbul's second-largest Catholic church.

Speaking during the multi-lingual service in front of a 1,200-strong congregation, which included senior figures from other Christian churches, Pope Francis thanked them for their "fraternal gesture" in attending.

The religious service took place after the pontiff arrived by plane in Turkey's largest city earlier on Saturday. Looking relaxed and smiling, Pope Francis was met on the tarmac of Istanbul Ataturk Airport by Fener Greek Patriarch Bartholomew, the Istanbul-based leader of many of the world's Orthodox Christians.

Shortly after leaving the airport, the Holy Father -- travelling in a modest car, at his request -- arrived at Istanbul's 17th century Sultan Ahmed Mosque.

Amid increased security -- an estimated 7,000 police officers are on duty in the city today -- Pope Francis was greeted at the Ottoman mosque by Islamic religious leaders.

Rahmi Yaran, mufti of Istanbul, talked to the pope about prayer, which is one of the five pillars of Islam, plus the mosque's architecture and read some verses from the Quran.

"I hope the visit will be fruitful and will contribute to world peace," Yaran told the pope, who thanked him for his remarks.

"We need prayer, so much prayer," Yaran added.

The pair then stood for a moment's silent reflection facing east -- the second time a Catholic pontiff has prayed in the landmark mosque.

The pope's arrival did not go unnoticed among crowds of onlookers in the heart of the city's historic district.

Anthony Joyce, 60, a tourist from England who arrived in Turkey on Friday said: "It is wonderful that the pope has come here to show the world unity among various religions.

"It is very good for the future," he added.

Boris Matrich, 34, a doctor from Bosnia and Herzegovina said: "It is a very good coincidence for me. I haven't seen this Pope before."

The Holy Father then travelled in a small motorcade the short distance to the city's Hagia Sofia museum.

A former Byzantine cathedral first built in 360 AD, it was converted into a mosque after the 1453 Ottoman conquest of the city. The iconic building became a museum in 1935.

The pope later emerged to the sound of the Islamic call to prayer from nearby mosques, before travelling to celebrate Mass at the Catholic Cathedral of the Holy Spirit.

The pontiff will later meet again with Fener Greek Patriarch Bartholomew. Relations between the Catholic and Orthodox Christian traditions are likely to feature high on the agenda.

Pope Francis is in Turkey as part of a two-day visit to the predominantly Muslim country. He is the fourth pontiff to visit Turkey. Pope Paul VI visited the country in 1967, followed by Pope John Paul II in 1979 and Pope Benedict XVI in 2006.

The visit has sparked interest on social media with the #PopeInTurkey hashtag on Twitter trending strongly.

During the first day of his visit Francis visited the Anitkabir mausoleum, the gravesite of Turkey's founding father, Mustafa Kemal Ataturk.

Pope Francis stressed the importance of holding dialogue between leaders of different religions during his landmark visit to the Turkish capital.

On Sunday, Pope Francis will meet Bartholomew to sign a ?Common Declaration' -- a statement from both the Catholic and Orthodox churches aiming to forge stronger ties between the two communities.

The Catholic News Agency also reports that Francis will meet with young people who have fled regional conflicts and are now studying at a refugee school in Istanbul.

The pontiff is to leave Turkey on Sunday afternoon.