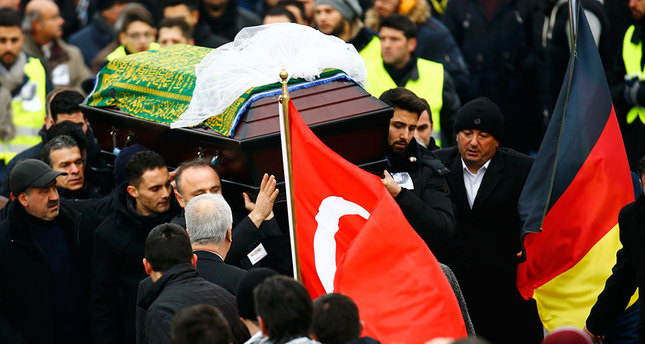 The funeral of a 23-year-old German-Turkish woman, hailed as a hero for confronting harassers of two German girls, brought together thousands in Germany on Wednesday

Tuğçe Albayrak, a German-Turkish national, was laid to rest on Wednesday, uniting thousands of people in mourning.

The woman was attacked by a Serbian teenager after she intervened in an assault on two young girls at a restaurant in the German town of Offenbach on Nov. 15. On Nov. 28, her family decided to switch off the life support machine for the young woman, who had been in a coma ever since she was brutally beaten in restaurant's the parking lot.

An Islamic funeral prayer was held for the teaching student at a Turkish mosque in Wachtersbach in the state of Hesse. Apart from the young woman's relatives and thousands of Turks and Germans, Hesse Minister-President Volker Bouffier, Turkish Ambassador to Germany Hüseyin Avni Karslıoğlu and senior officials attended the funeral ceremony, which was broadcast live on German television. A Turkish imam led the funeral prayer amid the wailing of Albayrak's relatives. A bridal veil was placed on the coffin. Albayrak was engaged and planning to marry in the near future. Mourners carried banners saying "You are our angel" in the funeral ceremony. She was buried in her hometown Bad Soden-Salmuenster after the funeral.

The young woman became a symbol of courage following her death with thousands attending vigils dedicated to Albayrak. German President Joachim Gauck has hailed her "exemplary bravery and civil courage" in helping a victim of violence. German government spokesman Steffen Seibert told reporters that the government and presidency may consider granting Tuğçe Albayrak a posthumous national order of merit.

An 18-year-old man, identified as Sanel M., was detained following the attack. Security camera footage that emerged after Albayrak's death shows an assailant approaching her and hitting the young woman, though it is not clear whether it is the detained suspect. An investigation is still underway while autopsy results, which will determine whether she died of wounds she sustained when she hit her head on the ground during the scuffle or deliberately hit by an object, have not yet been released.

German police had announced earlier that the two German girls Albayrak saved from harassment were found after they went missing following the attack, though their testimony to the police has not been made public yet.

A commemoration ceremony was also held for Albayrak in Sorgun, a central Turkish town in the province of Yozgat, where her parents hail from. The young woman's relatives in the town lit candles in memory of Albayrak at the ceremony attended by local officials. Yozgat Governor praised Albayrak for "standing against savages" and said she was an example of Turkish culture urging for helping the desperate.