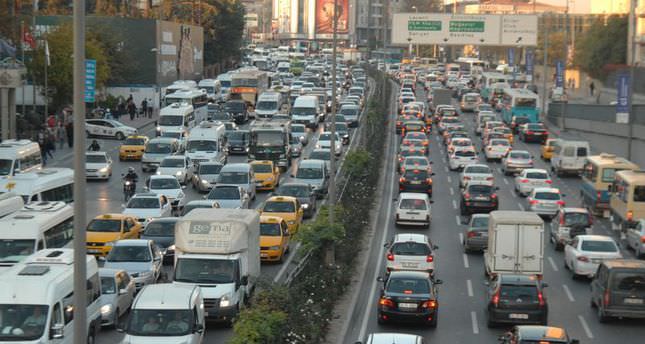 by Daily Sabah Dec 08, 2014 12:00 am
A new survey claims Istanbul's crippling traffic, one of the biggest problems for the country's most populated city, leads to a TL 6.5 billion economic loss

Istanbul's notorious traffic problem, one of the worst in the world, is believed to cause an average TL 6.5 billion ($2.8 billion) economic loss for the economy every year due to prolonged delays in travel, transportation of goods and the high level of gasoline consumption.

Two researchers from the Istanbul-based Beykoz Vocational School of Logistics studied 112 routes, including busy roads and streets, in the city of 14 million to look into the congestion levels and periodic differences in congestion.

The study, published in Milliyet daily, shows 40 minutes of every hour are "lost" in traffic daily. One of the study's most striking results is the fact that some routes that normally take about 29 minutes in the times outside of rush hours, take 100 minutes during traffic jams.

According to the study, the busiest route in Istanbul is the part of the TransEuropean Motorway (TEM) between İSTOÇ on the European side and Fatih Sultan Mehmet Bridge connecting Istanbul's European and Asian sides. İSTOÇ, a Turkish acronym for Istanbul Wholesalers' Market, is a main business hub housing warehouses and workplaces for more than 5,000 businesses.

Researchers calculated the departure and arrival times of vehicles between different points on the TEM and E-5 Highway, two major roads straddling the two sides of the city divided by the Bosporus as well as connection roads to highways. Roads were studied between 07:00 and 09:00 and between 18:00 and 20:00, rush hours with the busiest traffic and data from 300,000 vehicles were accumulated for every 30 seconds between those hours.

Some of the travel statistics the study found during peak hours of traffic congestion proved to be quite revealing. The distance between Kozyatağı on the Asian side and Taksim on the European side is 17.6 kilometers. It takes some 21 minutes at the time of low traffic but during rush hours in the morning and evening it takes up to 73 minutes as motorists have to lower their speed to as low as 14 kilometers per hour due to long snarls.

Motorists can travel from Bakırköy to Mecidiyeköy in 12 minutes by driving 80 kilometers per hour in the absence of a traffic jam but it takes 115 minutes during peak hours.

Professor Okan Tuna and Assistant Professor Serkan Gürsoy, two of the researchers that conducted the study, said they analyzed data over the past nine months collected from GPS devices on 300,000 vehicles and calculated the average travel times. Researchers said commuters may take different roads in the morning and the evening due to "fixed working hours with flexible departure hours." According to data from the Istanbul municipality, about 200,000 vehicles travel daily from the European to the Asian side and vice versa. Researchers say the economic loss per vehicle is TL 10.8 and the economic loss in traffic between the two sides of the city is an average of TL 2.1 million.

Istanbul is the second-worst European city after Moscow in terms of traffic congestion, according to 2012 data from Europe's biggest navigation systems company, TomTom. Authorities have so far failed to end the city's traffic problem despite several projects being launched to reduce the traffic flow, such as the Bosporus Tube Crossing project, an underwater road tunnel and a third bridge over the Bosporus.