Millions of Syrians in Turkey usher 2015 safe from violence 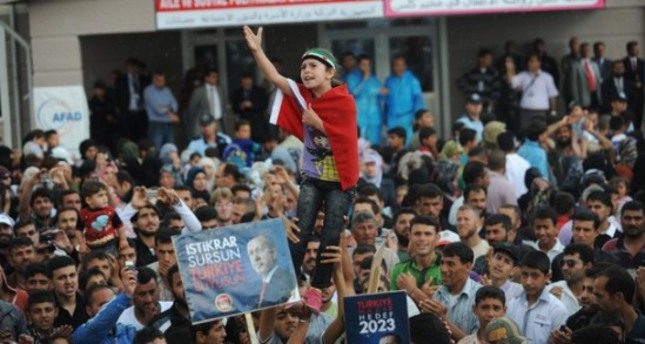 As they usher the fourth year away from their devastated country, Syrian refugees in Turkey find a glimpse of hope for a better future through the dedication of private and public aid groups

With almost no hope for peace back at home, close to 2 million Syrian refugees in Turkey welcomed the new year in a bittersweet manner, due to both the obvious homesickness they feel tempered by the relief of finding shelter away from the violence.

Syria is struggling with clashes between the regime, opposition forces and Islamic State of Iraq and al-Sham (ISIS) and other cases of infighting. As Turks welcomed the new year with street parties, it was just another day on the calendar for Syrians either staying in refugee camps, in makeshift tents, in parks or in residences in big cities. It is another day away from a home they have not seen in four years, or in cases of those who fled from the predominantly Kurdish town of Kobani, the first New Year's in another country.

Most Syrians remain outside refugee camps in the border cities of Turkey. In 10 provinces, 22 refugee camps and "container cities" where shipping containers converted into housing units are located, currently houses 221,447 Syrians.

Hazim Kadir, 42, fled Kobani, Syria, located opposite the town of Suruç in southeastern Turkey's Şanlıurfa province when ISIS launched a violent offensive to take over the town three months ago, causing another major influx of refugees into Turkey. Kadir lives in a refugee camp operated by the state-run Directorate of Disaster and Emergency Management (AFAD).

Speaking to Anadolu Agency, he said he would not have predicted the war would last so long. "2014 has been a year of great agony for us, so we are happy to see 2015. God willing, it will be a year of peace both for us and the world," he said. Bekir, another displaced Kobani resident, said they cannot take it anymore. "I wish so much that this suffering will end," he said. 2015 means just a bunch of numbers for Bekir and fellow Syrians. "We just want to go back home," Bekir told Anadolu Agency.

The coming of the new year also marks the onset of bad weather, which spells trouble for Syrians outside the camps. Turkish charities are mobilized to deliver clothes to Syrians who fled their country with little possessions. Charities also deliver coal and blankets to Syrians staying in cheap, decrepit houses and seek to accommodate more people living outdoors in the houses.

Still, Turkey is the favorite destination of Syrians fleeing the civil war as the country treats its "guests" with the utmost care. Turkey out-does other countries in delivering the most aid to Syrians and spent $4.5 billion on refugees.

There is more to come for Syrians seeking a place in the country. Turkish authorities announced that a new refugee camp for displaced Syrian Kurds who took shelter in the southeastern province of Şanlıurfa will be completed in January.

The camp, originally planned to house 20,000 people, has been expanded to a capacity of 32,000 and construction is underway in Suruç in Şanlıurfa, where nearly 200,000 Syrian Kurds from Kobani have already fled.

In the face of a massive influx of refugees, Turkey promotes a campaign for the establishment of a safe zone inside Syria next to the Turkey-Syria border in the international community. Yet ISIS's occasional advances and regime forces in the areas near the border pose dangers for the plan.