No thaw for Turkey’s west as snowfall returns 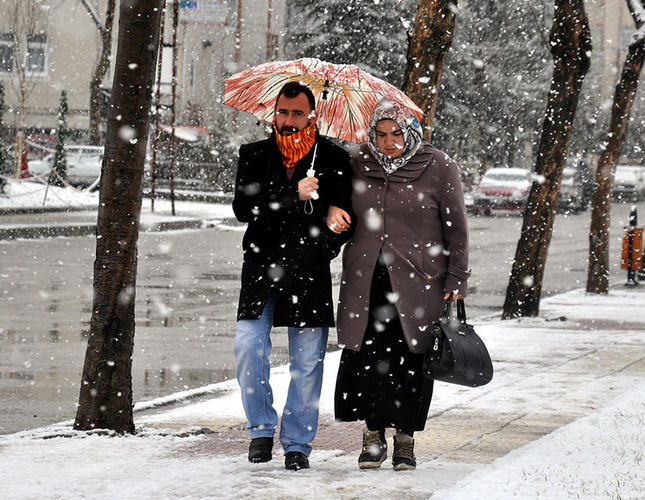 by Daily Sabah Jan 05, 2015 12:00 am
After a respite from heavy snowfall over the weekend, Istanbul and much of Turkey's western regions will experience another cold spell this week. Sleet followed by snow began to creep into Istanbul late on Monday. Elementary schools and high schools were suspended for Tuesday.

A new weather pattern with heavy snow, storms and blizzards hailing from the Balkans and Black Sea prevailed in western, northwestern and northern Turkey, as was ominously forecast by meteorologists, who warned that the cold spell would be unprecedented in terms of intensity. Some forecasters warn that the temperatures will drop to as low as minus 20 degrees Celsius for Istanbul. According to the state-run Directorate of Meteorology, the cold snap will affect the country today, Wednesday and Thursday and temperatures are predicted to be between zero and minus 5 degrees Celsius during the day.

The capital Ankara will not be spared from the cold front. Meteorologists warned that snowfall today will blanket the city and temperatures will drop as low as minus 15 degrees Celsius, especially at night on Wednesday, Thursday and Friday.

Authorities have warned drivers to reduce travel as much as possible and urged commuters to take public transportation, as icy conditions may add to the woes of the already-heavy traffic that can lead to traffic accidents.

Bad weather will likely affect ferry services and flights into and out of Istanbul, as they are expected to be disrupted by strong winds and snowstorms. The Istanbul Municipality announced that its Disaster Coordination Center (AKOM) will monitor any disruptions to daily life and deploy teams to clear snow in areas heavily hit by the snowfall.

Winter conditions already set in, in the provinces in central, western and eastern Turkey, closing down roads to villages and causing accidents.