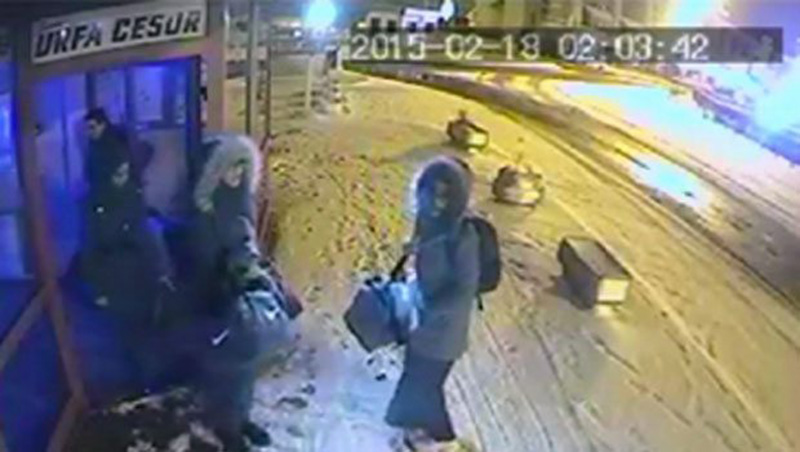 by Daily Sabah Mar 01, 2015 12:00 am
Three British teenagers who boarded a plane in Gatwick Airport, London to Istanbul, Turkey on February 17 and have not been heard from since, are believed to have waited for a passenger bus at Istanbul's Bayrampaşa bus station for 18 hours to go to the southeast.

According to a video recorded during their wait at the Bayrampaşa bus station, the three girls tried to board a bus going close to Turkey's Syria border. The videos, last featuring the girls, were taken by a surveillance system on February 17 and the next day. The final video shows the girls boarding a bus to Şanlıurfa. The girls are believed to have been trying to join the Islamic State of Iraq and al-Sham (ISIS), which is currently wreaking havoc in Syria and Iraq.

The U.K. government officials have been trying to blame Turkey for the missing girls, sparking a diplomatic war of words between the two countries. Turkish officials have said that they were informed of the girls, who boarded a Turkish Airlines (THY) flight out of London, three days after they went missing.

The Guardian newspaper reported that the House of Commons will summon Turkish ambassador Abdurrahman Bilgiç and Turkish Airlines CEO Temel Kotil for a session on March 10 "to give evidence about the problem of youngsters using Turkey as a route to Syria's battlefields."

BBC said Scotland Yard believes the Bethnal Green Academy students are now in Syria, transfered to Syria by ISIS militants waiting at the Turkey-Syria border. A BBC reporter claimed that a people smuggler took the girls to the border, where militants were waiting for them. U.K.'s Deputy Assistant Commissioner Helen Ball, the UK's senior national co-ordinator of counter-terrorism, told BBC that 60 women and girls had traveled to Syria and that four of the 22 who had travelled in the past year were younger than 20.

British Prime Minister David Cameron held Turkish Airlines responsible for allowing Shamima Begum and Amira Abase, both 15, and Kadiza Sultana, 16, to board a flight from Gatwick Airport to Istanbul. He implied that the carrier should not have allowed the girls to fly unaccompanied. THY officials have said in a statement that it was Britain's responsibility to check the passengers and girls were of the legal age to travel unaccompanied.

Sabah newspaper reported that Turkish sources denied claims by London police that they alerted Turkey one day after the girls flew to Turkey. The sources told Sabah that British authorities sent an informal email to the Turkish embassy, contrary to formal procedures, in London on February18, one day after their flight. However, since they sent the email after working hours, Turkish embassy staff could only alert Turkish security forces on February 19. Turkey contacted Interpol over the matter and Interpol responded that Britain did not inform them. The United Kingdom Home Office had only informed Turkish authorities on February 20, according to sources quoted by Sabah.
Last Update: Mar 01, 2015 9:49 pm
RELATED TOPICS