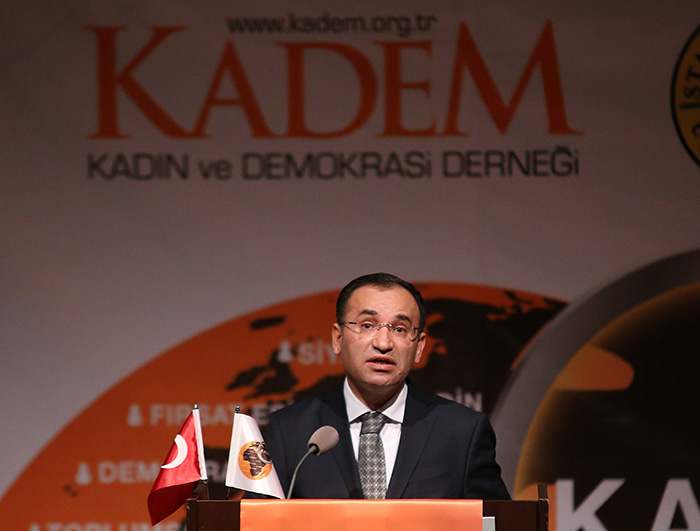 by Daily Sabah with AA Mar 06, 2015 12:00 am
Turkey's Justice Minister Bekir Bozdağ has announced his resignation at a conference about gender inequality organized by Turkey's Women and Democracy Association on Friday.

"According to the election regulations, I had to submit my resignation today, and I did but it will be effective on March 7," Bozdağ said.

Turkey's electoral regulations mandate that Transportation and Communication, Justice and Interior ministers to resign from their posts three months prior to the elections, to be replaced by undersecretaries. As the elections will take place on June 7, the deadline for resignations is March 7.

Justice Minister Bekir Bozdağ has called on nongovernmental organizations to stand with the government to fight gender inequality.

Speaking at the conference, Bozdağ said gender inequality was not just an internal problem, but an international one.

He said that discrimination initially starts in the family environment, claiming: "The biggest responsibility to fix inequality belongs to parents."

"We cannot stop violence against women with legal regulations only. We also need to focus on the reasons behind the violence and crimes," Bozdağ added.

Praising the conference organized by Turkey's Women and Democracy Association (KADEM), Bozdag said the government needs the help of nongovernmental organizations to encourage women to be more active individuals not only in family life, but also in the social, cultural, political and economic fields.

"All the women nongovernmental organizations and the state institutions and organizations should work together to fight against gender inequality. We can make a considerable change only by working together," he said.

According to Bozdağ, Turkey is one of the countries that has taken important steps for gender equality in the last decade. However, the U.N. says there are areas that still require improvement, according to a report.

Only one woman in four is employed in Turkey and women are more likely than men to have low-paying, unsecured, low-status and vulnerable jobs, the U.N. said.

Similarly, the Turkish Statistical Institute says that women, who constitute almost exactly half of Turkey's population, make up only 30 percent of the labor force.

Also, there are very few women in top management, only 12.2 percent according to the most recent statistics from the Geneva-based International Labor Organization (ILO).

Turkey was ranked 45th out of 48 countries that were by ILO for the percentage of women in high-level, corporate positions, coming in below Thailand and above Ukraine.
Last Update: Mar 06, 2015 11:19 pm
RELATED TOPICS