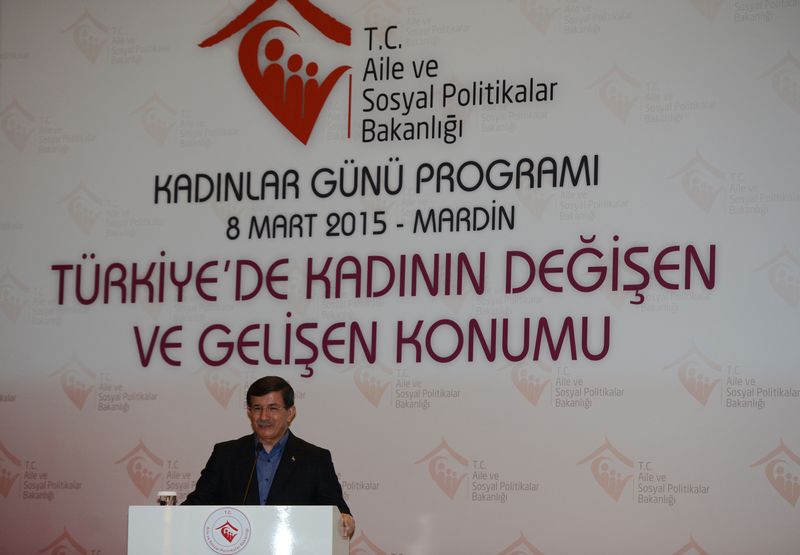 by Anadolu Agency Mar 08, 2015 12:00 am
Turkey's Prime Minister Ahmet Davutoğlu called on Sunday for women all across the country to embrace the reconciliation process, with which he said "no more cries of mothers will be heard."

"A friendship project" is how Davutoğlu described the country's resolution process - a government initiative launched in 2013 with the aim of bringing an end to the decades-old conflict with the outlawed PKK.

Davutoğlu stressed that any matter that is not handled by women cannot succeed.

He was speaking at a panel on "Women's Changing and Developing Status in Turkey" in the southeastern province of Mardin Sunday.

"Neither our religion nor our traditions are based on discrimination against women," Davutoğlu said. "Every single day that you show respect to your mother, love for your wife and mercy to your daughter, is women's day for us."

The Turkish PM called on society to stand against "violence against women," which he said is indefensible regardless of the reason.

Pointing to the "historic reforms" made in the past decade to improve the rights of women in Turkey, Davutoğlu said a number of government regulations had been carried out to ensure gender equality and increase the punishment for violence against women.

The number of women deputies in parliament also increased from four percent in 2002 to 14 percent in 2014, he said.

Davutoğlu also announced a new 2016-19 action plan on "Fighting Violence against Women," which will include legal regulations, as well as projects that increase awareness about the issue.

Starting on Sunday, violence prevention and monitoring centers, currently in 14 provinces, will be expanded countrywide, he added.

Erdoğan promised to continue working to make the lives of women better and easier and to encourage their participation, both in the economic and political fields.

"I believe that our educated, brave and self-confident women in every field will help our country reach a more developed level," he said.

Stressing his determination to combating violence against women, the Turkish president called on women to protect their own rights and to stand up to violations against them.

Turkey is among the first countries to provide women with democratic rights, Turkey's Foreign Minister Mevlüt Çavuşoğlu said in his message.

Çavuşoğlu also said that Turkey is part of all key international agreements on women rights, and has supported closer cooperation, both regionally and internationally, in order to develop women's rights.

Turkey was the first country to sign "The Council of Europe Convention on Preventing and Combating Violence against Women and Domestic Violence" - also known as The Istanbul Convention - in 2011 and has attached great importance to the implementation of the convention, the Turkish FM added.