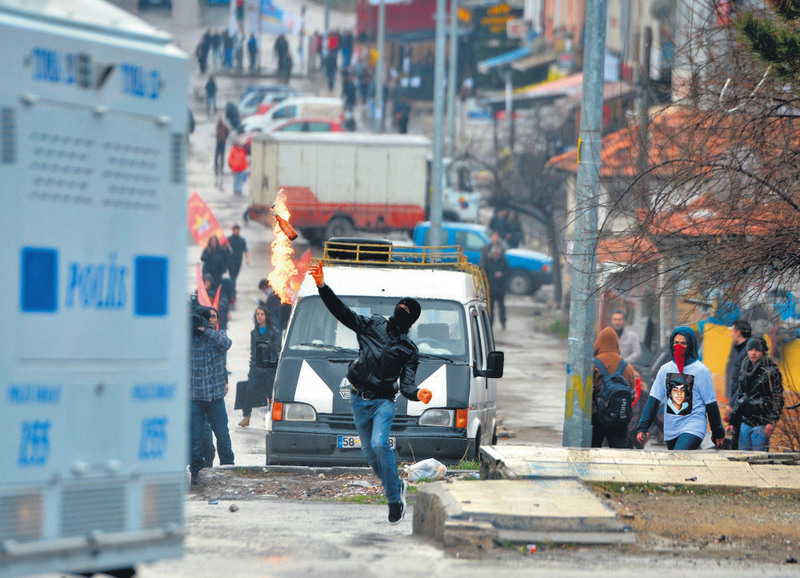 by Yusuf Ziya Durmuş Mar 11, 2015 12:00 am
The first anniversary of the death of a 15-year-old boy killed by police in the 2013 Gezi Park protests was marked yesterday across Turkey, with rioters engaging with police in clashes.

In Istanbul, rallies over Berkin Elvan's death turned violent in Okmeydanı, the neighborhood where Elvan lived before he was hit by a tear gas canister in the Gezi Park protests and lapsed into a coma. A group attempted to march to Elvan's grave in a neighborhood ceremony, but police intervened in their unauthorized rally. The crowd, wearing masks and wielding Molotov cocktails engaged in clashes with the police. They set up barricades on the streets and broke security cameras to prevent their identification by police. Gunshots rang out in narrow alleys in the Okmeydanı streets. Rioters scattered to alleys but the police presence remained in place to prevent further unrest throughout the day. Another group of rioters attempted to occupy a high school in the Çekmeköy district. Police fired tear gas at masked rioters who responded with stones and firecrackers.

In Tuzluçayır, a district in the Ankara synonymous with riots by supporters of terrorist organizations, a group converged on the occasion of one year since Elvan's death and blocked a main road. When the police moved to remove them, they tossed Molotov cocktails and iron balls at teargas-firing officers. Eleven people were detained when they resisted police.

In Gezi Park near Taksim Square, where protests Elvan participated in originally started in the summer of 2013, a small group of demonstrators converged. They joined hands and unfurled banners denouncing Elvan's death before police dispersed the group.

This year's protests, or riots, over Elvan's death were relatively minor compared to the violence that broke out last year after Elvan succumbed to his injuries following 269 days in a coma. Armed with shotguns and pistols, members of terrorist organizations including the Revolutionary People's Liberation Party-Front (DHKP-C) took to the streets last year in Okmeydanı and other districts. Burakcan Karamanoğlu, a 22-year-old man, was killed when rioters opened fire on a passerby in Okmeydanı on March12, 2014.
Last Update: Mar 12, 2015 1:20 am
RELATED TOPICS