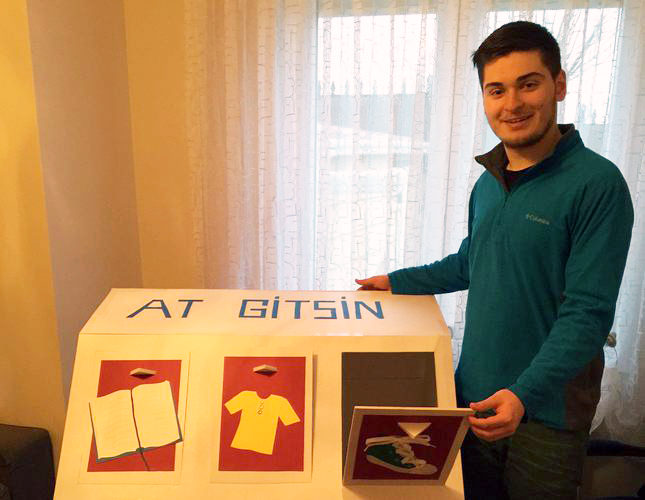 by Daily Sabah Mar 17, 2015 12:00 am
One Istanbul student's social service project about the plight of Syrian children refugees is gearing up to make a big change in the mindset of Turkish students.

Ahmed H. Kaleli, a high school senior from Istanbul, has been collecting aid for the Syrian refugees living in the suburbs of Istanbul and southeastern Turkey for several years. He believed that the aid drives were of short duration and its effectiveness wore off after a short while. So Kaleli came up with the idea of aid boxes being placed in schools. While he was living in America, he had seen clothing donation drop boxes on street corners. He came up with the idea to replicate such a concept in Turkey. "This idea came straight to my mind. We practically grew up surrounded by these things," said Kaleli in a recent interview.

Instead of having drop boxes on the street where they would be susceptible to the elements or run the risk of being neglected, Kaleli thought it would be great to have one box placed in each school.

"I felt that one way we could improve upon the American model was by putting them in schools. This way we could reach out to a large student body and increase awareness among the youth," Kaleli said.

To take it a step further, Kaleli designed and built his own model donation box with several compartments for different items like books, clothing, and shoes, dental supplies etc. The aid box is already installed in a pilot school. He also has an Internet presence to help explain the project and called the project 'At Gitsin' in Turkish meaning 'Drop and Let it Go'.

Kaleli plans for sponsorships to provide an important source of income for schools to cover the costs. "It would be great if we could minimize the costs of the box with advertisements. The important thing is this project must be self-supporting, not a financial burden to schools. If it can be cost effective, more schools would be willing to participate in the project," Kaleli added and he noted that he is already in contact with sponsorship candidates. He hopes that these drop boxes will be a common sight at Turkish schools soon.

"Often, we are overwhelmed with our schoolwork that we forget what is going on around us. Hopefully with these boxes placed in schools, students will be reminded everyday of their social responsibility," he said.

Kaleli's project was invited to a competition held by the Turkish Ministry of Education. He hopes that his project will be chosen and a large impact will be made all the way from the schools of Istanbul, to the refugee camps along the border and be permanent part of schools helping the needy. Kaleli soon plans to present the project to international aid organizations such as UNESCO and USAID.