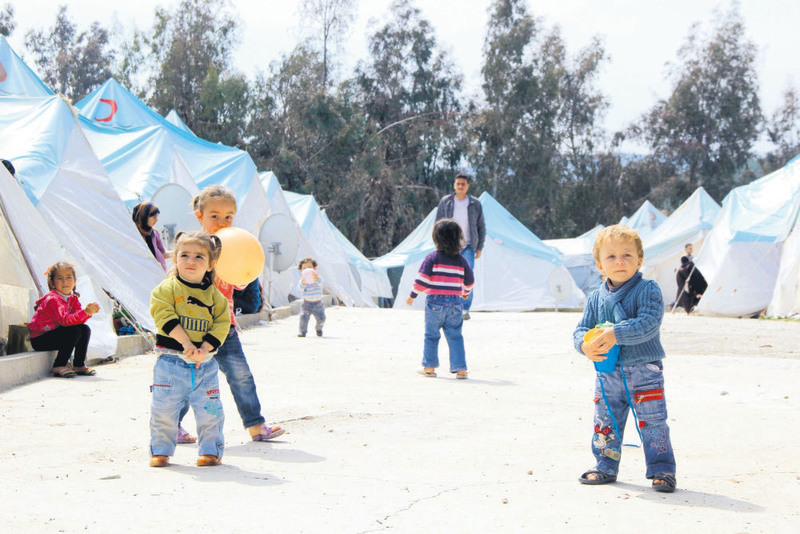 This month marks the fourth year of unrest in Syria that evolved into a civil war, and another year away from home for children born in Turkey's refugee camps

Turkey's first refugee camp, set up in Yayladağı town of the southern province Hatay for displaced Syrians, is home to a distinguished group: children who have never seen their country of origin.

An unprecedented uprising started in March 2011 that was followed by a violent crackdown by the Assad regime forced millions of Syrians to take shelter in other countries. Turkey, nearest for those in the northern Syria, became the primary destination.

Among those fleeing en masse to Turkey were expectant mothers enduring long walks and surviving attacks by regime forces. They gave birth to children in the Yayladağı tent camp, hundreds of kilometers away from their hometowns and these children, nor their parents, are not able to return home as the conflict still rages on in Syria.

Accustomed to a life in tents, children, all in the same age group, do not complain while their parents look forward to returning to Syria.

Shahab Hammoudi, hailing from a village in Syria's Idlib arrived in Yayladağı with her husband and three children in tow. Her son was only one-month old when they arrived in 2011 and only her 10-year-old daughter remembers their life back in Syria. She gave birth to two more children in the camp. "They think these tents are their real home. We are safe here and thank Turkey for its hospitality but we missed our home so much," Hammoudi said.

According to figures provided by the Health Ministry in 2014, Syrian women who took shelter in Turkey have given birth to over 46,000 children since the unrest in Syria forced them to flee from home.

Turkey is home to some 1.8 million displaced Syrians and about 250,000 of them reside in 25 camps located in border cities.

United Nations Children's Fund (UNICEF) say some 14 million children in the Middle East suffer as a result of the conflicts in Syria and parts of Iraq. About 2 million Syrian children live as refugees in Turkey, Lebanon, Jordan and other countries, according to UNICEF figures. "For the youngest children, this crisis is all they have ever known. For adolescents entering their formative years, violence and suffering have not only scarred their past; they are shaping their futures," UNICEF Executive Director Anthony Lake said last week, adding that they were in danger of "being lost to a cycle of violence."

To ensure a better future for the Syrian children, Turkey offers education at refugee camps but a large number of Syrian children living outside the camps and in an impoverished state, lack education opportunities although local and international charities mobilize to provide education through private schools.
Last Update: Mar 20, 2015 10:17 pm
RELATED TOPICS