Rehabilitation a walk in the park for drug addicts 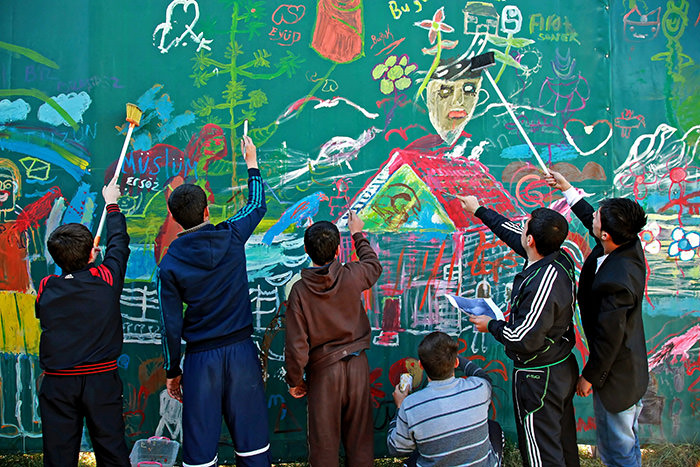 by Daily Sabah with AA Mar 27, 2015 12:00 am
A clinic for drug addicts in Turkey is offering horticulture classes for its patients in the parks where they once abused drugs.

The rehabilitation of a drug addict is a long, winding course involving medication and psychological treatment. A clinic in the south-central province of Gaziantep adds vocational training to treatment in order to help recovering addicts find a reason to live.

Run by the provincial municipality, the clinic trains young patients in a set of occupations, from welding to furniture repair, but the most interesting among them is horticulture classes. The classes are taught in the very parks where addicts once frequented in remote corners in order to get their daily fix.

Gürkan Berkcan, who runs the clinic, said horticulture, landscaping and related training are part of the six-month rehabilitation process, and 12 young recovering addicts are taking part in the second semester of the courses this year. Participants are selected among those who have done well in the rehabilitation process. Many did not have steady jobs before being admitted to the clinic and clinic officials said they can find jobs with the certificates they receive after completion of the courses. Berkcan said last year's graduates are already employed by the municipality.

"It is better to give them something tangible. It significantly aids in their treatment when they see themselves achieving something, adapting to a new life and communicating with people better," Berkcan said.

M.Y., 19, is among the recovering addicts attending the horticulture classes. He was admitted to the clinic three months ago after six years of drug abuse. "I used to come to these parks to take drugs. I often joined other addicts in tearing down wooden benches and trees so that we could light a fire to keep us warm while taking drugs throughout the night. Now it feels like a whole different world for me. I feel better when I work here, looking after the park. I am definitely more sensitive toward the environment and looking forward to doing this job once my treatment is complete," he said.

A.K., 17, was admitted to the clinic four months ago. He has been using drugs for about eight years. He said that treatment has improved his life. "Most importantly, I won back my family," he said. "I used to come to these parks to do bad things, but now I am learning how to tend plants here. It is a real pleasure. My family is from a village and they still have fields there. Maybe I will go back there and work in the field," he said.

The rate of drug use in Turkey is 2.7 percent, according to official figures, but Ankara launched a preemptive anti-drug action plan last year. Measures against drug abuse include more effective law enforcement, harsher sentences for drug dealing and other related crimes and a campaign to raise awareness in families among other steps.

An increase in the number of rehabilitation clinics is one of the measures. According to police and Health Ministry statistics, there are only 24 rehabilitation clinics offering treatment for addicts, with the centers having a capacity of just 623 beds for addicts in need of long-term treatment. This means there is only one bed for every 320,000 drug or alcohol addicts in Turkey. The government pledged that 20 more centers will be established by 2017 and clinics will also set up in prisons for rehabilitation of drug users there. Five clinics offering outpatient treatment are planned for this year.

According to the most recent figures dating back to 2013, over 218,000 people applied to rehabilitation centers for outpatient treatment, while over 8,000 sought inpatient treatment, with many being turned down due to a shortage of beds in clinics.

Quoting a rapid action plan for counter-narcotics efforts, Sabah daily reported that the government will offer assistance in finding employment to recovering drug addicts who often find themselves outcast. The state-run job agency, İŞKUR, will prioritize recovering drug users in employment in the private and public sector.