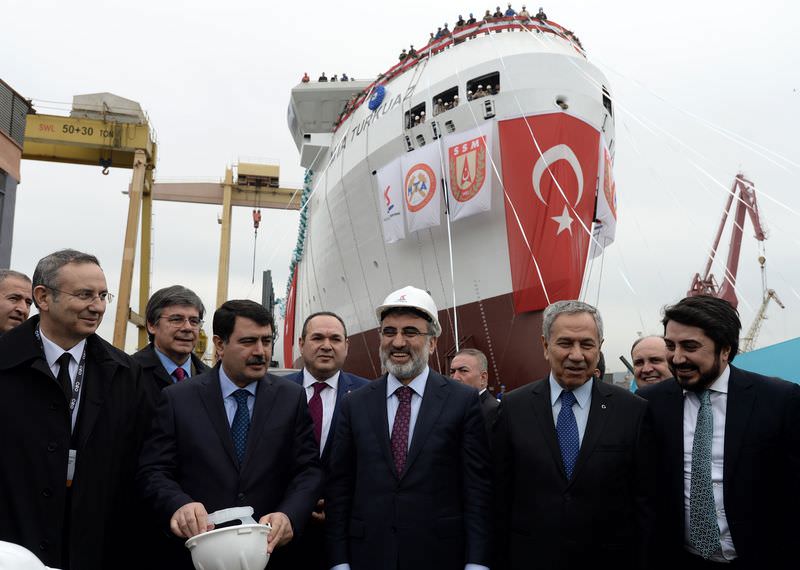 |Photo: AA
by Anadolu Agency
Mar 28, 2015 12:00 am
The first Turkish-made seismic-survey vessel, named TURKUAZ, has been launched from Istanbul on Saturday.

TURKUAZ, produced in a shipyard in Tuzla, Istanbul, for the Mineral Research & Exploration General Directorate at a cost of 300 million Turkish liras ($115 million) and launched on Saturday, will carry out climate change and ecologic research as well as comprehensive underwater search activities using a remote-controlled system.

Turkish Deputy Prime Minister Bülent Arınç said in a speech if Turkey had not produced in its vessel, it would have cost much more.

He said: "This can be seen also as a move to cut the current budget deficit.

"Turkey now can easily produce by its own vessels like this, all projects supported by the defense industry can be realized in Turkey."

Arınç said the vessel was 86 meters long, 23 meters wide and equipped with seismic operations capabilities, equipment and laboratory facilities and also had a helicopter platform.

"The vessel will increase our gas and oil search potential in the region, besides searching for potential mining in our seas," Turkey's Energy Minister Taner Yıldız said on Thursday.

TURKUAZ, which began production in 2011, will serve for at least 30 years with a crew of 50 and has the capacity to operate uninterrupted for 35 days away from land.

Arınç said that this example showed that Turkey had arrived at a point where it could produce products not just for its needs, but products that could serve the entire world.
Last Update: Mar 28, 2015 5:07 pm