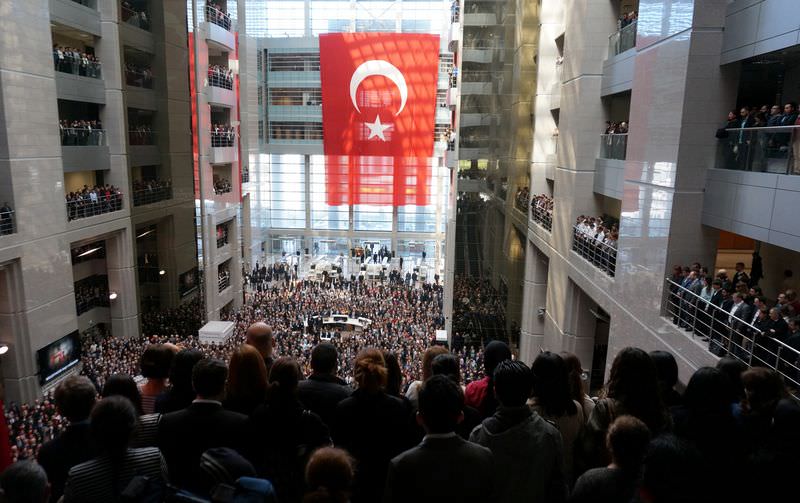 by Daily Sabah Apr 02, 2015 12:00 am
The Media Association, a leading nongovernmental organization (NGO) of Turkish journalists, issued a statement condemning several members of the media over coverage of the hostage crisis at an Istanbul courthouse on Tuesday.

Mehmet Selim Kiraz, a prosecutor, was killed in his office at the Çağlayan courthouse by two terrorists from the Revolutionary People's Liberation Party-Front (DHKP-C) hours after he was taken hostage.

The photo with a gunman pointing a pistol at his head, released by the terrorist organization, splashed the pages of several newspapers, and some media outlets adopted language that curiously refrained from labeling the assailants as terrorists. Some journalists even expressed sympathy for the two gunmen and blamed the police for raiding the office to rescue Kiraz, stating the gunmen should have been negotiated with while ignoring the fact that the raid took place after the prosecutor was killed.

In its statement, the Media Association said the coverage served as propaganda for the terrorist organization. "The purpose of terrorism is to spread fear, hurt peace and sow the seeds of hatred among individuals. Propaganda is the most important tool for terrorists seeking to destroy democracy and people's faith in democracy. At a time of a terror attack, media institutions should avoid being raison d'etre for terrorism, be it consciously or unconsciously," the statement said.

The statement warned that journalists should not be a tool in the hands of terrorists and refrain from coverage that may give legitimacy to terrorist organizations. It particularly highlighted the labeling of terrorists as "revolutionaries" and "activists," "which shows terrorists in a positive light."

The Media Association named Hürriyet, Cumhuriyet, Posta, Bugün and Today's Zaman as outlets that published the photo of the prosecutor posted by the DHKP-C as well as websites of Cumhuriyet, T24 and several others "for releasing written and audio materials supplied by terrorists without taking a moral filter into consideration." It went on to condemn Mirgün Cabas, Fehim Taştekin and Banu Güven and other journalists for issuing messages from their social media accounts that "attempted to normalize terror attacks, to find excuses to defend it and to portray terrorists as likeable people."

The coverage of the incident had also drawn the ire of Turkish leaders. Prime Minister Ahmet Davutoğlu condemned the media outlets and ordered a ban on the abovementioned media outlets from covering the funeral of the prosecutor.
Last Update: Apr 03, 2015 3:19 pm
RELATED TOPICS